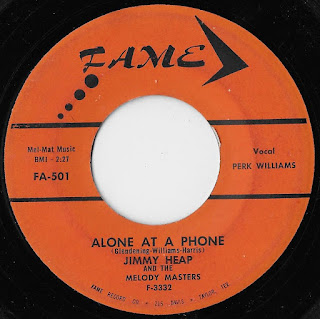 "Alone at a Telephone" was recorded during the fall of 1957 at KTAE's studio in Taylor, Texas. The line-up included Jimmy Heap on lead guitar, Horace Barnett on rhythm guitar, Butterball Harris on steel guitar, Perk Williams for the last time on vocals and fiddle, likely Bill Taylor on trumpet, Bill Glendening on bass, and George Harrison on drums. Their second independent production and their first release on the band's newly founded Fame record label, "Alone at a Telephone" and the other song recorded, "I'm One of Those," were fine mid 1950s western swing recordings by a band that soon would make the change to popular rock'n'roll. But for this release, they settled with the style they had played for over ten years by then.

The disc was released at the end of 1957 and saw review in Billboard's C&W segment on December 23 but the magazine staff was not impressed with the record. However, they were more impressed with the band's second Fame release, recorded and released around the same time, and reviewed in the very same Billboard issue. Heap and the Melody Masters continued to record their own songs as well as other artists on their Fame label until 1961. They also would use the Fame label to release their "party" LPs in the 1960s.