Jimmy Heap on Capitol, Part I 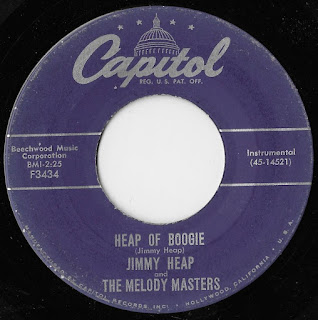 We continue our little journey through the life and times of one of Texas' popular western swing dance bands, Jimmy Heap and the Melody Masters. Today featured is their 1956 Capitol release "Heap of Boogie," a western swing instrumental. By that time, the band virtually had dropped from Capitol's stable of artists.

Both "Heap of Boogie" and its flip side, the Jack Rhodes-Dick Reynolds composition "Conscience, I'm Guilty" (which would become #4 hit for Hank Snow in 1956) were recorded on December 12, 1955, at an unknown location in Texas. "Heap of Boogie" was a boogie-based instrumetal, with songwriting credits to Heap, and it featured the drumming of George Harrison for the first time. It was also only the second time the band had used drums on a recording session so far. Band members got their spotlight during the song, performing solos on their instruments, although sax player Ken Idaho is not audible. The line-up consisted of Jimmy Heap on lead guitar, Horace Barnett on guitar, Cecil "Butterball" Harris on steel guitar, Perk Williams on fiddle, Arlie Carter on piano, Bill Glendening on bass, Ken Idaho on saxophone, and George Harrison on drums.

Capitol released both songs in May 1956 on Capitol #F-3434, thus making the Heap version of "Conscience I'm Guilty" the first one to appear on the market, as Hank Snow's record wasn't out until June. Actually, Snow recorded his version on May 31, 1956, making it a cover version of the Melody Masters original recording. This had happened to the band earlier with "The Wild Side of Life," having recorded the original version but the hit got snatched away by another artist. Although the Melody Masters were a popular band, the majority of their records did not reach the charts, as it was the case with this one. Capitol gave them a final shot a couple of months later with the release of "Mingling" b/w "This Song is Just for You" (Capitol #F-3543) from the same session.