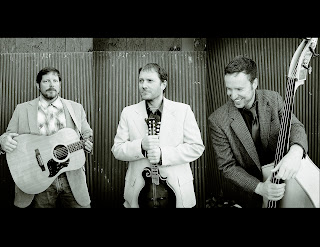 The Rubber what?? This was my first thought when I learned of this promising Bluegrass/Americana/Folk trio. You may never heard of them before like me and I think that's a shame.

The Rubber Knife Gang consists of Henry Becker (guitar/banjo/bass/vocals), John Oaks (bass/guitar/banjo/vocals) and Todd Wilson (mandolin/guitar/vocals) and hails from Cincinnati, Ohio. Their second album, "Drivin' on", will be released on September 10, 2010, and when I was starting to listen to them, I first thought "okay, give 'em listen, will be an okay warble". But when I heard the first track (which is also the title track) "Drivin' On", it blew me away! I never expected such a refreshing sound. You can't call it bluegrass, can't call it old-timey or country either. Their style borrowes elements from all three forms but has a very modern attitude. The slightly bluegrass feeling is delivered by the mandolin, the banjo adds old-time elements. What is the best about the songs of the Rubber Knife Gang is that their melodies are more country-ish, sometimes even rock'n'roll elements are present (for example the vocal style on "Chasing Your Tail" or slap bass on some recordings).

Listening to "Drivin' On" really amazed me. It's a re-freshing, new sound, which did not gives you the feeling to be set back away out in the mountains (except for "Hole In Your Sole" and "Drink Up John", where you can imagine to be on an ol' barn dance) but is very modern as well as often thought-provoking and happy at the same moment. The most promising and innovative bluegrass/americana/folk album I have ever heard.