This post is to honor George Kent, who recently passed away at the age of 75. "Hello, I'm a Jukebox" was on one of the cheapo-comps I listened early on when I was not so familiar with country and I always liked it. It was a typical country song to me and his recordings of "I Always Did Like Leavenworth" and "Mama Bake a Pie, Daddy Kill a Chicken" also were great.

"Hello, I'm a Jukebox" was written by the legendary Tom T. Hall, whose most famous song was "Harper Valley, PTA", recorded by Jeannie C. Riley. Kent, who had started his career in the 1950s and had recorded since, had his best days at Mercury in the late 1960s and early 1970s. He recorded "Hello, I'm a Jukebox" in 1969 with the wonderful background voice of Diana Duke. Early in 1970, the song charted in Billboard's Hot Country Singles and peaked at #26. It was Kent's most successful single. 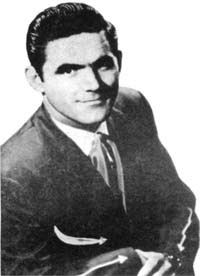 Here is a real tough question.

The song Diana Duke sings in the background on "Hello, I'm A Jukebox" sounds good enough to be a single on it's own. Was it ever released? If not, is that backing track available somewhere?

In fact, the song was released. It's called "Tonight the Jukebox Plays for Me" and came out after the release of Kent's single on Mercury 73033 (the flip was "Nothing in Common"). I don't know if it's available, sorry.

Thanks kindly. I'll start lookin' for it. It's another country gem that fell through the cracks. Probably never been reissued either.

This in reference to "Tonight The Jukebox Plays For Me" by Diana Duke that was mentioned by Roky and Mellow. The lyrics she sings in her single are NOT the lyrics she sings on George Kent's record. I got my copy on E-bay, and was a bit disappointed that the lyrics didn't match up.

Once heard a song by George Kent Called I fell In and got hurt all over on Mercury label never manged to obtain it I have on LP by him. Sorry to here he has passed on with a bit of luck he could have been a great star.

Did you all happen to notice that George's recording is on:

Diana's recording is on:

Could the background on George's record be a Diana demo that got so much response that Mercury decided to release the background as an actual record but used a different take than on the George record.

It could be also possible that Tom T. Hall had the ideo to "Hello, I'm a Jukebox" and wrote the background track for that particular song. After the success of Kent's single, the producers possibly thought that it would be clever to let Duke re-record it for an own single. Both theories are possible. Maybe we will never know...

I played guitar for George in the early and mid 90's at the Cow Palace. George was quite the writer in his own right and taught us all alot. He allowed msicians to grow and was always there with an ear. He will be missed. And yes the song Tonight the Jukebox Plays For Me was secondary to Hello, I'm a Jukebox.