The Story of Sheldon Gibbs

I came across Arizona musician and entrepreneur Sheldon Gibbs while researching the times and career of rockabilly one-shot Dennis Herrold. Where's the connection between Herrold, a Texas based artist, and Gibbs, who was located in Phoenix? Both artists likely never met in their lives. The bridge between these two men is Dale Noe, who at one point played in Gibbs' band but also performed alongside Dennis Herrold in a Texas based combo. While going deeper and deeper into the research, I did a quick search on Gibbs and have scraped together what I could find.

Every city in the 1950s had men like Gibbs: they were musicians, led a band, were heard on radio, ran clubs or bars and also were also part time record producers. Henry Sheldon Gibbs was born on March 10, 1903, in Kentucky. By the late 1920s, he had married his wife Ola (born in 1904 in Eureka Springs, Arkansas), who gave birth to their daughter Joan in 1928, followed by Henry Sheldon, Jr.. The couple resided in Eureka Springs at that time but had relocated to Phoenix, Arizona, by the end of World War II. However, it is likely that Gibbs and his family had moved there at least a year earlier.

The Arizona Republic ran an advertisement on August 30, 1945, that announced the reopening of "their newer and better Gibbs Café," a spot which was operated by Gibbs and his wife on 612 West Van Buren Street in Phoenix. The opening ceremony featured live music performances by Gibbs and his Willow Breeze Playboys. Around the same time, the band became mainstays on KPHO radio. 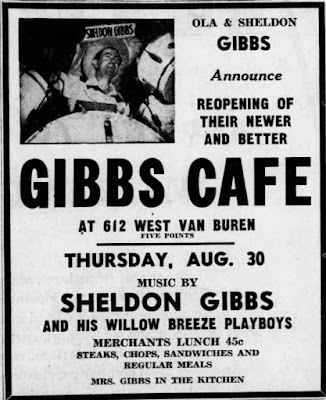 Eventually, the Willow Breeze Playboys changed their name to the Arizona Ranch Boys. However, the former name was used by Gibbs for one of his large ballrooms in Phoenix, the Willow Breeze Ballroom. He ran another one in the city, the New Frontier Ballroom. The band got so well-known and popular that Gibbs established two incarnations of the Arizona Ranch Boys, so they could play both ballrooms at the same time. Billboard reported on November 29, 1947, that Gibbs and the band had moved from KPHO to KOY. At that time, the band consisted of Gibbs, Whitey Thompson as well as Paul R. Herndon on guitars, Art Hawkins on steel guitar, Slim Forbes and Frankie Bourland on fiddles, Ed Russell on piano and accordion, Jimmy Carroll on banjo, Jerry Allen on banjo and "vibes", and Gene Herndon on bass. The group also featured a vocal trio consisting of Gibbs, Paul R. Hendon and Jimmy Carroll, billed as the Bar-G-Trio on stage.

Soon, Gibbs became the program director of the station and one day, faced a young, unknown amateur singer by the name of Martin David Robinson, who had worked various odd jobs after his discharge from the US Navy in 1946 and was earning his money as a truck driver by then. He had heard a cowboy singer on KOY and thought the singer "was pretty bad. One time, he got right in the middle of his song and he forgot the words and didn't know what to do. And I thought, man, this guy has got to be making a living doing this." Robinson went to the station, auditioned with "Strawberry Roan" and Gibbs was persuaded immidiately. He fired the other singer and engaged Robinson, who appeared on the station as "Jack Robinson." This singer would eventually be known as Marty Robbins, one of country music's biggest stars.

In 1950, Gibbs set up his own record firm called Desert Recording Company with its label, Smart Records. The company was located on 1213 East Highland Avenue in Phoenix. From 1950 up to 1953, he released several 78rpm records by his band on this label. The first appeared in November 1950 as by Sheldon Gibbs and his Arizona Ranch Boys, featuring "Chinese Breakdown" and "Wakeup Susan." By 1952, a young guitarist by the name of Dale Noe had become a member of the band. In May 1952, Gibbs released a record featuring Noe as a vocalist and guitarist, "I'm Sorry I Got in the Way" b/w "Houn' Dog Boogie." Billboard reviewed the disc on May 24 and especially the latter side is of interest here with Noe showcasing his skills on the guitar. Billboard commented: "Sheldon Gibbs and the combo beat out a rhythmic instrumental with energy. Should catch a fair share of juke coin." The single caught some juke coin in the Phoenix area likely but not too much outside.

Although the Arizona Ranch Boys performed mainly western swing, "Houn' Dog Boogie" pre-shadowed the rockabilly and rock'n'roll sounds that would come out of Phoenix only few years later by the likes of Sanford Clark, Joe Montgomery, Jimmy Johnson, Lonesome Long John Roller, and others.


By 1952, Gibbs also emceed his own local TV show and was spinning records on KPHO again, as reported by Billboard on May 10, 1952. He was also promoting other artists in the region.

By 1960, Gibbs was on KRIS and his Willow Breeze Ballroom on Grand Avenue had developed into a hotbed for local musicians that would hold jam sessions there on weekends. At the same time, Gibbs founded the Hilligan label, operated from the same adress as the ballroom. The label was mainly an outlet to release two recordings by country turned rock'n'roll singer Jimmie Patton, who had previously immortalized himself with the raw "Yah! I'm Moving" on Sage Records. For Hilligan, he recorded the trememdous "Okie's in the Pokie," which is now a favorite among rockabilly fans. The other side was not as energetic as "Okie's" but "Hut-Hurp Rookie's Marching Song" was a rocking country style song with a fast piano solo. Gibbs released them on Hilligan #001/2 in 1960 and on both sides, he gets co-writting credits. Both sides were picked up by Russell Sims, who released them on his Sims label (Sims #117) in September 1960. "Okie's in the Pokie" was issued without the spoken intro, however.

Nice to see Gibbs and his bands remembered. I'll check him out if I can find an mp3 somewhere.

Nice to see Gibbs and his bands remembered. I'll check him out if I can find an mp3 somewhere.

Super job on this posting. It's always nice to get more information on Arizona music history. I have the records and this is great information to have on my discography. I always wondered who was playing the vibes on "Bird Book Boogie." Keep up the good research.

Henry Sheldon Gibbs Jr ,son of Henry and Ola Gibbs has passed away on 20th November 2021.
My father 92 years old had worked in the restaurant and dance hall when he was a young boy I remember in 1960 I was able to work in the restaurant and learn how to be a cook in the restaurant. The best thing I remember about the Dancehall was all the different opportunities and different artists that came and played at the Dancehall.
My father will be missed with all the great stories he told over the years about the Dancehall it is sad we have no way of remembering all the history give me the first big country western bands in the United States

I'm sorry for your loss but thank you for letting me know. I'd be honored to expand my post on your grandfather. Let me know if you could provide more info!

Dwayne, as I am living in Europe, it is difficult to phone over to the US (and expensive). Corresponding via e-mail (you'll find my e-mail adress on my blogger profile page) would be easier for me.