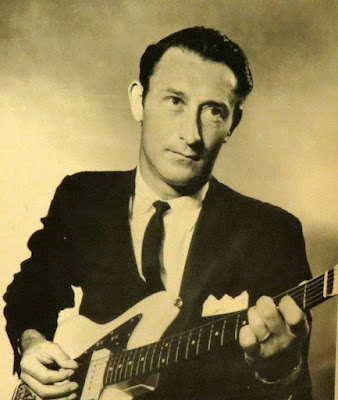 Today would have been Luther Perkins' 94th birthday. Perkins, who was a member of Johnny Cash's band, the Tennessee Two, right from the start in 1954 until his untimely death in 1968, was an integral part of the Cash sound and the success of Johnny Cash. Cash, Perkins, and Marshall Grant started playing gospel music in Memphis, Tennessee. Their musical skills were limited, yet they had a passion for the music. In addition to Perkins' rudimentary skills on the guitar, his instrument was a bit beaten-up. This led him to keep it simple and stick to picking the bass strings of the guitar and muted them with his right hand. The "boom-chicka-boom" sound was born. It was simple but effective.

On stage, Perkins was shy and seemed emotionless due to his fear to make a mistake. During the years, his skills on the guitar improved and he became much better than in 1955 (which can be spotted on recordings and live performances) but his fundamental sound remained the same.

I have chosen a couple of live peformances from the early years of Johnny Cash and the Tennessee Two (or Three, with the subsequent addition of drummer W.S. Holland) that show not only Perkins' uncomparable style of "performing" but also the perfect imperfection of these young musicians that producer Sam Phillips always searched for.

So Doggone Lonesome - Grand Ole Opry (1955)
Introduced by Little Jimmy Dickens and Hank Snow. The gamblers in front of the band are Flatt & Scruggs and the Foggy Mountain Boys.

Email ThisBlogThis!Share to TwitterShare to FacebookShare to Pinterest
Labels: Memphis