Good Times in Fayetteville
Ernest Tucker and the Preservation of Rock'n'Roll 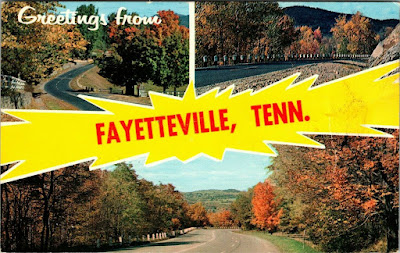 Our journey through the green lands of Tennessee takes us a little west, about 130 miles to be more precise. We stop in Fayetteville, a city that has not much to brag about. With 7,000 habitants, the city is the largest in Lincoln County and also its county seat. The highlight of the year is the Lincoln County Fair in Fayetteville. Back in the late 1950s, the city had a population around 6,800.

Fayetteville was the home base of local DJ Ernest Jackson "Ernie" Tucker, who was a radio personality on WEKR for many decades. He was born on May 31, 1923, in Lincoln County to Elmer A. and Ina R. Tucker. Ernie Tucker was musically inclined as he learned to play the fiddle and mastered the instrument on a high level. He married Grovene Dyer from Fayetteville in 1946 and eventually began working as an engineer and disc jockey for the local radio station WEKR.


Tucker decided to form his own record company, which came into existence in the spring of 1959 in form of Linco Records. He also set up Linco Music to handle the publishing of original song material. But before Tucker was able to release recordings on his own label, he formed a short affiliation with blues and R&B guitarist Jimmy Liggins. Liggins formed his Duplex label in 1958, releasing the first record by Mattie Jackson and Ervin "Big Daddy" Rucker that were produced by Tucker in January 1957 in Fayetteville. In extend to that, Tucker continued his association with Liggins as he was involved in more of the early Duplex releases. The first discs of the imprint even had a Fayetteville address on the record labels.

By May 1959, Tucker had gone back to running his own label. The debut release on Linco was the raunching "Swing It Little Katy" b/w the country tune "The Last Bouquet" by an act called Clyde Owens and the Moonlight Ramblers. Owens recorded for a plethora of labels from the late 1950s until the 1980s, including for the Great and Chart imprints in Nashville.

Tucker recorded a slew of local rock'n'roll talent for Linco, including Curtis Long, Hollis Champion and Clayton Hillis. Their recordings became minor cult favorites among rock'n'roll collectors nowadays. Copies of particular releases can be worth 200-400 $ (or more, depending on what you are willing to pay).

After Tucker released the Johnson Boys & the Jay Dees' record record in late 1960, Linco fell dormant until 1962. Then, suddenly, Tucker revived his operations to record Charlie Waggoner, a Fayetteville native, who was a member of the Rocky Mountain Jamboree from Denver, Colorado, at the time of his Linco recordings. The most notable of his four cuts for the label was a 1963 country rocking version of the old song "One Eyed Sam", that was also recorded by such artists as Eldon Baker & his Brown County Revelers (Vocalion, 1938), Tommy Spurlin & the Southern Boys (Perfect, 1956), Tex Williams (Capitol, 1960) and more recently, by Tom Ball & Kenny Sultan on their album "Happy Hour" (2005).

Neither of Tucker's productions became a hit nor were even near to be a hit. But they were preservations of authentic, unique music. Tucker closed down Linco, at least the label but possibly not the publishing arm, in 1963 after Charlie Waggoner's last single. There was another, later, Linco label from Greensboro, North Carolina, which is not connected to Tucker's label, however. Ernie Tucker continued to work for WEKR during the next decades and, being an accomplished fiddler, won the 1973 Athens Fiddler's Contest.

Ernie Tucker passed away April 19, 2010. There has not been a proper reissue of the Linco recordings, although Cees Klop devoted a LP to selected Linco recordings (White Label 8808 - Rock-a-Billy from Tennessee, Vol. 2, 1979). A compilation featuring Tucker's complete recordings is still missing, however.