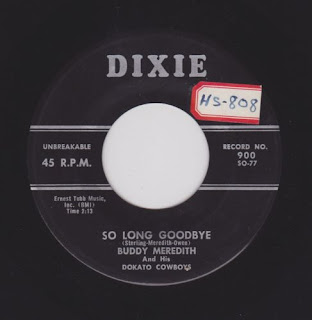 Buddy Meredith and his Dokato Cowboys - "So Long Goodbye" (Dixie 900)
Although mostly forgotten today, the "maestro of music" Buddy Meredith was quite a popular entertainer back in the early 1960s. This post features one of his early recordings, which probably dates back to the mid to late 1950s. The flip side to this Dixie single was "Moon Song." This record company should not be confused with the many other labels that went by the name of Dixie. It's neither one of the Starday custom, budget and full-fledged subsidiaries nor is it the one from Maryland, Kentucky, or wherever. Since this record shows no location, it is pretty difficult to locate it. Fred Netherton's Wildwood Trio also recorded for a Dixie record company, whose label design shows some similarities to this one. 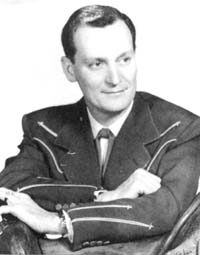 Buddy Meredith was born on April 13, 1926, and hailed from South Dakota. "So Long Goodbye" b/w "Moon Song" was perhaps his first release. In the early 1960s, he and the Kota Cowboys appeared on KOTA-TV and around the same time, he was a DJ on KRSD in Rapid City, South Dakota. The Kota Cowboys featured Bob Haley, Stringbean Svenson, and Lowell Sterling. Meredith and the band could be seen every Saturday night on KOTA's Hoedown Jamboree during the late 1950s and early 1960s.

Meredith began to record for Nashville Records (another Starday subsidiary) in the early 1960s and had a chart entry with "I May Fall Again" (Nashville 5042) in 1962. It reached #30 on Billboard's Hot C&W Sides in May 1962. On May 25, 1962, Meredith cut his first session for Starday and that same year, "Secret Sin" b/w "I Miss You All Over" appeared. He was one of the few artist who were transfered from Nashville to the Starday main label. A second single followed in 1962 and Meredith cut a whole album for Starday entitled "Sing Me a Heart Song."

Around 1964, Meredith switched to Rice Records and moved his family from Rapid City to Nashville and was signed to the mighty Jimmy Key's Key Talent, Inc. He recorded his signature song "Flop Top Beer" for Rice and was later signed to Guyden Records. Meredith remained a successful live act during this time, heading a country music festival along with Waylon Jennings and Dottie West. He also appeared at the Navajo Hogan in Colorado Springs, Colorado, that year.

Meredith was inducted into the South Dakota Country Music Hall of Fame in 2008.

Buddy Meredith and The Dakota Cowboys recorded a song named "Tears " on Cullman Records # 6411 and I'm try to find the recording online. Any ideas ?