The Jim Dandy label story:
Memories of photos and records

I have been into the story of the small Jim Dandy record label since late 2010. Since my first post about it back then, I was able to assamble more detailed information about this local South Carolina label that was operated by Jim Price. Carolina music researcher Vance Pollock as well as a handful of witnesses and relatives of Price made it possible to present now an extended write-up about it. 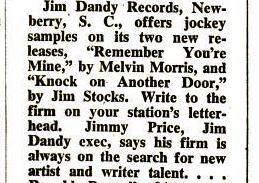 In December 1961, Billboard reported that Jim Dandy "offers jockey samples on its two new releases," which were by Melvin Morris with "Charlie's Got a Horn" / "Remember You're Mine" (Jim Dandy #1004) and Jim Stocks with "Knock on Another Door" / "Shadows" (Jim Dandy #1005). Further, Billboard explained that Price was always looking for new artists and songwriters.

Another act that recorded for Price was the duo Buck Jones and Tommy Hagen. They were from Wilson, North Carolina, and performed locally with Jimmy Capps, specializing in Louvin Brothers songs. In 1960, they had recorded their first disc for Ronald Killette's Glendale label and followed up with "A Lost Love" / "Never Love Again" for Price's Jim Dandy label (Jim Dandy #1007). The songs were in the Louvin style, which is no suprise since their lead guitarist Jimmy Capps was playing with the Louvins since 1959. Another disc by Buck and Tommy was rushed out by Price in 1962, comprising "Forever" and "Where Shattered Memories Are" (Jim Dandy #1008). Hagen joined up with Charlie Louvin about eight months after the Louvin Brothers split up in 1963. He played mandolin and sang the high harmony parts that Ira used to provide. Buck Jones remained in the Wilson area, recording some more 45s for Tiki Records, working on radio and television as well as running his own nightclub that closed in 2015. 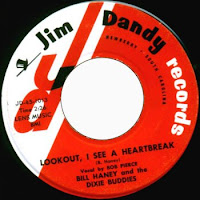 In 1962, Bill Haney and the Dixie Buddies had at least two releases on Jim Dandy. While "Oh! How I Cry" (Jim Dandy JD-1012) was a bluegrass song, his version of the "Crawdad Song" on Jim Dandy JD-1013 is a country outing with rock'n'roll elements. Haney was born in Haywood County, North Carolina and in 1957, he was part of Curtis Lee and the Dixie Buddies, with whom he appeared on the WRVA New Dominion Barn Dance out of Richmond, Virginia. His first record was made for the Atlanta based Super label. He toured the east coast in the 1950s and 1960s, playing country, bluegrass, and rock'n'roll, and also recorded for Dee-Dee and JFI.  In the 1980s, he performed locally with a band called the "Zassoff Boys" and also recorded an album with this group.

Jim Price closed down his Jim Dandy business in the early 1960s. In 1968, his wife Rita died but he remarried in 1971 and moved to Clinton, South Carolina, where Jim Price died in 1989. He was buried at the Newberry Memorial Gardens next to his first wife.

Extended Play
EP 101: Lulu Belle & Scotty - Tenderly He Watches Over Me / When They Ring the Golden Bells // Have I Told You Lately That I Love You / Spanish Fandango

EP 102: Arthur Smith and the Crossroads Quartet - Deliverance Will Come / Will the Circle Be Unbroken / Amazing Grace // Beyond the Sunset / The Ninety and Nine / Whispering Hope

JDLL P102: Arthur Smith and the Crossroads Quartet - I Look Up / He Will Set Your Fields on Fire / When He Reached Down His Hand for Me // I Can Find My Way from Here / Going Down the Valley / How Great Thou Art

Thanks Bob! Your additions are always great!

I doubt if the Jim Dandy Castaways are the same as the Soma Castaways. They were upper midwest natives who were in thier teens in 1965 and it's doubtful they would have recorded on an obscure Carolina label in about 1962.

They are Buck Jones and Tommy Hagen from Wilson, N.C. Tommy Hagen joined up with Charlie Louvin for about 8 months after the Louvin Brothers split up in 1963 to play mandolin and sing the high harmony parts that Ira used to provide. Buck Jones remained in the Wilson area recording some more 45s for small local labels and working in radio, television and the nightclub business.

I have the Castaways - Caravan 7" and i have always wondered what the other records on this label sound like. Any tips on the best way to track any of the other ones down?

one possibility would be ebay and buy the records. I have also two Bill Haney recordings and Howdy over at his 45 blog has the Saxons 45 posted, just search the blog.

The Castaways on the Jim Dandy label were Bill Trader and the Castaways - Bill Trader who penned the hit "Now And Then There's A Fool Such As I" (recorded by Hank Snow, Elvis and others).

The small studio was located inside the Jim Dandy photo finishing /film developing shop in Newberry in the late fifties and early sixties and was operated by Jim Price.

Do you have more info on the label/studio, e.g. how long it lasted?

Jim Dandy Records KB 2326: Arthur Smith and the Crossroads Quartet - 7 inch 33 1/3 with picture sleeve - Side A) Deliverance Will Come - Will The Circle Be Unbroken - Amazing Grace Side B) Beyond The Sunset - The Ninety And Nine - Whispering Hope

James Broy "Jim" Price married my great-grandmother Ruth in 1971 and moved to Clinton, SC. He died in 1989 and was buried in Newberry Memorial Gardens next to his first wife Rita, who died in 1968.

We have been purchasing records from what appears to be the archives of JD Records in Newberry SC and have sent along information on ones you are missing as they are discovered. Thanks for your efforts. Safran's Antiques - Columbia, SC

Jim Dandy pressed a few of his records with Kay Bank in Minneapolis. I have label scans of at least 8 releases, if you want them just email me.
sllblogspot@gmail.com

Great work on the blog! Experts Communication is the leading Customer Services.