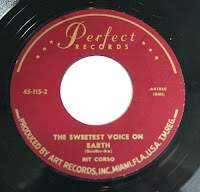 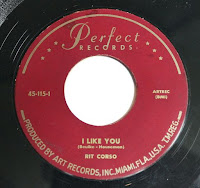 Here is an addition to the Perfect label history courtesy of Joe Schmidt. Perfect was part of Harold Doane's little recording empire in Miami and is best known for releasing Tommy Spurlin's country and rockabilly sides. Doane also released a couple of Latin Jazz recordings on Perfect.

BUT: does anyone out there have info on this release? My search came up with nothing about the artist, Rit Corso. The release date of it must be around 1956-1957 (which would be the latest release on the label). I haven't heard the songs either, so this is quite a mystery. The songwriter on both sides was Nellie Bonita Beulke (1896-1973), who was a professional composer from Idaho, it seems. The earliest effort I found was "Love's Question" from 1948. She also penned "Beat, Beat, Beat It" from 1954. "Sweetest Voice on Earth," one of the songs on the Perfect single, was also released by Larry Reed on the Nashville based Deb Records in 1960 (Deb #11760). Beulke co-wrote the song in 1955 with Ted G. Ax, with whom she also wrote "My Cuddle Up Huddle Up Lovin' Baby." Ax also penned "It's Heaven to Be Loving You" in 1955. Beulke also co-wrote "I am a Failure at Everything But Love" with Quincy S. Spann. She died in 1973 and is buried at Gamlin Lake Cemetery in Sagle, Idaho.

Email ThisBlogThis!Share to TwitterShare to FacebookShare to Pinterest
Labels: Miami