The city of Chattanooga, located in Southeast Tennessee on the banks of the Tennessee river, has been home to radio stations and local country musicians from the 1930s up to the 1950s. Radio stations like WDOD, WDEF, and WAPO featured country music acts - WGAC even hosted the "Tennessee Hayloft Jamboree" in the mid-1950s. By 1960, there had been some small record labels but none of them were professional companies. Herbert Schleif's Hap record label was likewise semi-professional but its recorded output was - compared to other labels - immense.

"Happy" Herbert Schleif, a clothing store owner and part-time country music promoter in Chattanooga, established the "Mountain Recording Studio" in early 1960. He was living outside of Chattanooga in a house near Daisy, Tennessee (renamed Soddy Daisy in 1969). His studio was located on the corner of East 8th Street and Georgia Avenue in Suit 3 of the Dome Building, which was built in 1892 for the Chattanooga Times and it seems that it later housed also offices by other businesses. Billboard reported on April 25, 1960, that Schleif had just "launched the Mountain City Recording Studio there in partnership with Carl Allen." Who Carl Allen was remains unknown at this point. Schleif was friends with local musicians Peanut Faircloth and Norman Blake, who performed in a bluegrass band called "The Dixieland Drifters" since the mid-1950s. The Dixieland Drifters would become Schleif's first act to record.

At the same time Schleif started his studio, he also set up his own in-house label Dub Records and his own publishing firm Mountain City Publishing Company. The Dixieland Drifters, then consisting of Howell Culpepper, Charlie Evans, Norman Blake, and Peanuts Faircloth, had recorded previously an unissued session for Sun Records in Memphis and several discs for Murray Nash's BB label in Nashville. The group was approached by Schleif and recorded "I Can't Do Without You" and "Cheating Love" at his studio. Both recordings made up the initial release on the Dub label (Dub #1001) in June 1960. It is interesting to note that Schleif did press the record on both 45 and 78 rpm format. At that time, most companies stopped pressing the ancient 78 format and concentrated on 45 and 33 rpm records. Also, be aware that this is not the same Dub label owned by Foster Johnson in Little Rock, Arkansas.

Dub seems to have been only a short-lived venture. No other singles appeared and by June, Schleif had already formed a new outfit he called Hap Records. Schleif was said to "[...] always [have] a delightful grin on his face," hence his nickname "Happy" and the label's name. Raif Faircloth, Peanut Feaircloth's son, however, remembered it was a acronym for Herbert and Peanut. According to him, Faircloth was involved in the Hap label and was a co-owner. He remembers regarding the Dixieland Drifters: "[...] My memories of the Dixieland Drifters were mainly going way out Lookout Mountain, past Plum Nelly to the Blake home place when they'd rehearse. It was dad, Hal, Charlie and Norman at that time." 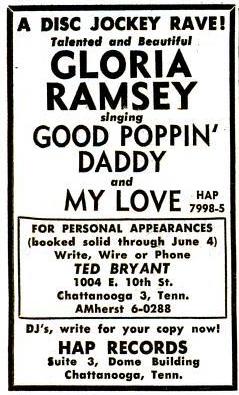 Hap's first release was by female vocalist Gloria Ramsey, whose "Good Poppin' Daddy" b/w "My Love" (Hap 7998-5/7999-6) appeared approximately in May 1960. Probably recorded at Schleif's studio, its record number yet escaped the later chronologial numerical system of the label. The next three releases, to all accounts released during that same year, are still unknown to me. Hap #1003 was by country music singer Kirk Hansard, who recorded Peanut Faircloth's "Johnny Collins" and the Webb Pierce/Danny Dill song "Two Won't Care." Billboard reviewed the single on August 29, 1960, in the C&W field. Born in Flatrock, Alabama, Hansard had recorded earlier for Dot in 1956 and continued his work as a recording artist for Bethlehem (1962), Columbia (1963-1967), Chart (1968-1969), and Kapp (1970). While recording for Hap, he was based in Knoxville and worked the Mid-Day Merry Go-ROund show on WNOX as well as the WWVA Jamboree out of Wheeling, West Virginia.

Gene Woods, who appeared on WBCA in Cleveland, Tennessee, recorded for Schleif "Afraid" / "The Ballad of Wild River" (Hap #1004, 1960). For the label's next release, Schleif coupled "You Won't Fall in Love" / "Will Angels Have Sweethearts" (Hap #1005) by the Dixieland Drifters, who had recorded both titles likely in summer or early fall that year at Mountain City studio. The record appeared around October. "You Won't Fall in Love" was a song composed by Fletcher Bright and his wife Marshall, while the flip was a band's original. Bright performed with the band at that time occasionally. He recalled that "[...] it was an old 45 single. I think Norman Blake was on the dobro, Peanut Faircloth was singing. My late wife Marshall wrote the words, borrowing heavily from a Jimmy Van Heusen tune ('It Could Happen to You'), and I supplied the melody. I was playing with the Dixieland Drifters at the time."

At that time, singer and songwriter Houston "Buck" Turner had joined the group. Turner had performed and recorded with Tani Allen's band in the 1950s and also played the clubs in the region with his own band. He secured a songwriting contract with Murray Nash's Ashna Music Publishing in Nashville and used the Dixieland Drifters for his recordings. The first record with Turner's recognizable participation was "Bongos and Uncle John" / "How Big A Fool" (Hap #1009) in the spring of 1961. While "Bongos and Uncle John" was penned by Charlie Evans, Norman Blake, and Howell Culpepper, "How Big a Fool" was a Buck Turner/Gene Woods song.

This particular record surrounds some inconsistencies. The song was re-released in June 1962 by Murray Nash on his Do-Ra-Me label (Do-Ra-Me 1412) under the name of "Uncle John's Bongos" with a different flip side, "Walk Easy." The latter song had been recorded and released by the Dixieland Drifters already in 1958 on Nash's B.B. label. Likely due to promising sales, the 20th Fox label picked it up and issued it again in late 1961. The fact that it was first released on Hap suggests that it was also cut at Schleif's Mountain City studio. Murray Nash, however, claimed that all of the Dixieland Drifters recordings he was connected with were done at his studio, Sound of Nashville. It adds to the confusion that a guy called Norm, nephew to a woman called Marylove Matthew, claimed his aunt was the owner of the studio and that he was present at the recording session in Nashville. His memory on this issue was probably a bit weak. But who was Marylove Matthew? And how was she involved in running the studio? Further research on her remains abortive.

Buck Turner and the Dixieland Drifters, however, stayed with Nash to produce their following records. Nash gave "Uncle John's Bongos" one last try in the spring of 1962, coupled with "The Best Dressed Beggar in Town." The Drifters broke up around 1963, while Turner kept on performing around Chattanooga. Schleif continued Hap well into the 1960s, recording and releasing at least some 70 records, mostly country and bluegrass. One of the Hap singles featured his wife Viola with "The Voice of the Americans." Both Herbert and Viola are now deceased but their descendants remember them still today with fondness. Buck Turner died in 1999, Peanut Faircloth in 2010.

"Happy" Herbert Schleif's recorded legacy still has to be unearthed and reissued in a proper way. Many of the recordings still have to be found, a detailed research has to be made. I promise I'll do my best to give Schleif the recognition he deserves. 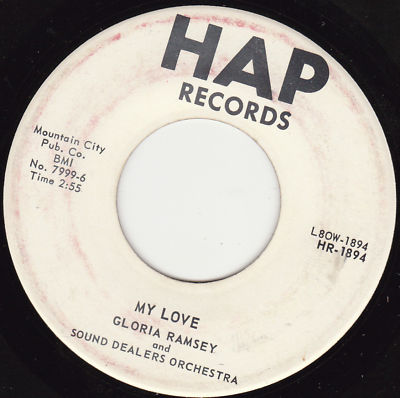 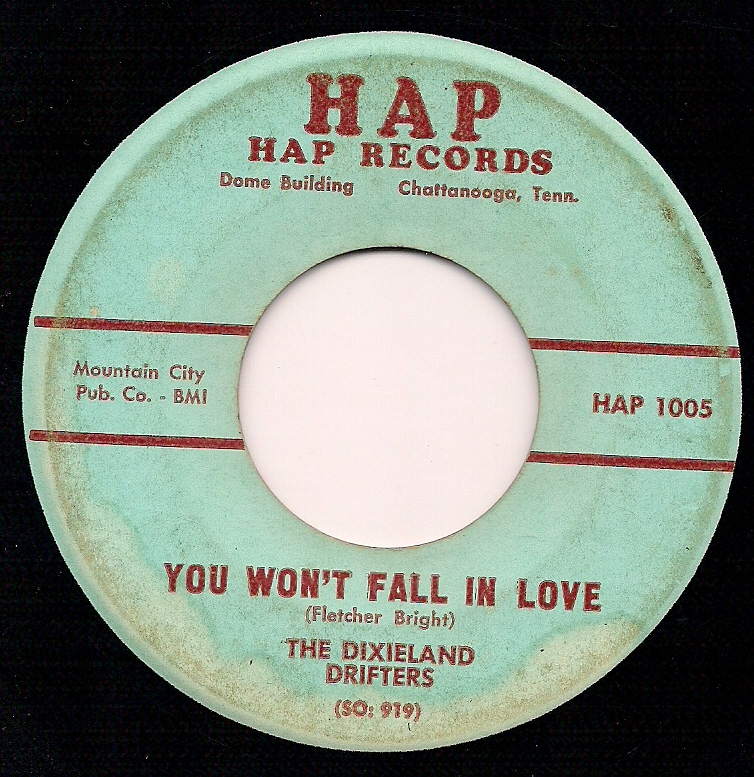 Looks like there was another label with the same name, based in San Angelo Texas.

I am looking for more information on Arnold Sanford songs. Can anyone help me please?

Cynthia Brown I'm Herbert's granddaughter . I would love to speak to someone about his recordings, studio, etc...

Herbert was my father. Hap label was named after the grin my father's face. Everyone called him Happy Herbert. Peanut liked to tease my dad and say it was for Herbert and Peanut but it was not. Peanut was a musician on many of my Dad's recordings. They used to go the the Grand Ole Opry and hang out backstage. Peanut was a very dear family friend . My father knew a lot of musicians. I remember my mother telling me that Norman Blake played on one of his recordings. Good memories.

Now I understand a little why my grandmother, wife of Peanut Faircloth, occasionally sings a little Boogie Woogie in the Night Club tune at 87... 💕

The unidentified man The Dixieland Drifters picture is my husband’s uncle Gay Roberts from Pisgah,Alabama

@Me: thanks! How did Gay Roberts belong to the band? Was he a member?