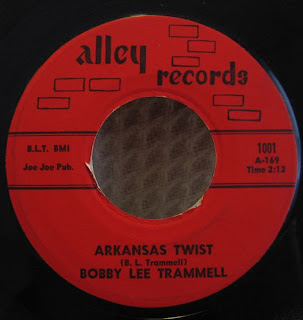 Probably one of the most famous recording companies in Arkansas, Alley Records was based in Jonesboro, Arkansas, home to many local musicians and labels. The person who was behind Alley was Joe Lee, a jazz musician who had extended experiences in the music business.

It was the year 1961. Joe Lee, Bill Keisker, Ed Cooper, and Charles Moyers set up the Variety Recording Studio on 213 East Monroe Street in Jonesboro and created the Alley label. Keisker, who was a retired physician from Jonesboro, built the studio's control board himself. Eventually, Joe Lee became the sole owner of Alley and Variety. Previously, he had recorded and worked as an A&R manager for Fernwoord Records out of Memphis. Lee later also recorded for his label. Apart from Alley, Lee also ran Jon-Ark and the Papa Joe's label. Variety also served as a custom recording service for other musicians who did not recorded for Lee's record labels.

The first Alley single was also the most successful. Bobby Lee Trammell, who had returned from California and now lived in his hometown Jonesboro, came in and asked Lee to record him. Trammell still performed wild rockabilly and rock'n'roll, although the time for hard rocking cats faded. Although the studio wasn't even furnished completely, Trammell insisted to do the session. The product was "Arkansas Twist" b/w "It's All Your Fault," which quickly became a hit. Even before its release, it sold 4,600 copies and before it was played on radio, 8000 exemplares were sold. On June 9, 1962, Billboard reported that "two other disks [that] are breaking well in the area [Memphis/Mid-South] are 'Arkansas Twist' by Bobby Lee Trammell on the Alley label, [...]." The song became Trammell's signature song and Alley's most popular record.

Others who recorded for Alley were Arkanas rockabilly singer Larry Donn, Kenny Owens, Jimmy Doyle Payne (Trammell's bass player), Ray Coble, the Exquires, and many others. The Folk Swingers, who made a guest appearance on the WSM Grand Ole Opry, had a single on the label as well as the Pacers, who were under contract with Razorback from Newport. Bobby Crafford, owner of Razorback and a member of the Pacers, had leased the masters to Alley. From 1962 on, 146 singles were released on Alley. In the 1990s, the studio burned down and many of the tapes were destroyed. By that time, Alley was already closed down. In 2006, Ram Records issued a compilation with 18 Alley recordings.

A detailed discography can be found on Arkansas 45rpm Records.

Thanks, I corrected it.

My father was still a young practicing physician when he built the sound board in 1961, not retired.

I have another Alley Records single, I presume a reissue
Betty Heywood - Nothing Without Your Love - numbered 100
Can anyone point me to the 1st issue?
Cheers
Bob

Would you be interested in selling your betty Heywood 45? I am trying to complete the entire Alley discography and need it to do so. I would pay good money for it. My e-mail address is jwchandlerharris@gamil.com. Cheers!

Sadly, Joe Lee passed away in Jonesboro on May 19, 2013 at the age of 83. All of the master tapes from the studio were removed by him in 1982 so none were destroyed when the building burned. Joe kept the tapes (hundreds of them) at his home. I don't know where they are now. Hopefully his daughter has kept them.

If anyone has a copy of The Folk Swingers "On a Cloudy Day," my sis and I are looking for a copy. Our dad Bill Bell is the bass player and singer on that album.

I also have a rare VG 45" Sourwood Mountain that I'd be willing to trade or offset your prince.

We do have them stored away in a safe place!