The Story of "Brother Green" 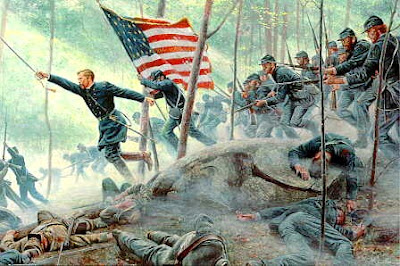 The traditional Civil War ballad "The Dying Soldier", also known as "Brother Green", always fascinated me. I first heard it by Buell Kazee, who recorded it in 1928 for Brunswick Records and since I found only little info on this wonderful piece of music history.

The origins of this song are not clear but nearly every version referred to "Virgin Mary" which perhaps suggests an Irish ancestry. The tune and some of the lyrics were perhaps brought from old Erin to America. During the Civil War (or after the war), new lyrics were added to the song. The tune shows some similarities to another old English ballad, "Barbara Allen". The song's earliest mention was in 1908 and Buell Kazee was probably the first to record it in 1928 as "The Dying Soldier". Kazee was a traditional Kentucky ballad and folk singer but "Brother Green" can be found in several states in the US: Kentucky, Indiana, Illinois, Ohio, Missouri, and possibly several others.

The second known recording was made by a singer called Clarence Ganus, who was born July 13, 1910, in Searse, Alabama. He recorded "The Dying Soldier" in 1929 for Vocalion. Another version was waxed by the famous Carter Family for Montgomery Ward in the mid-1930s. 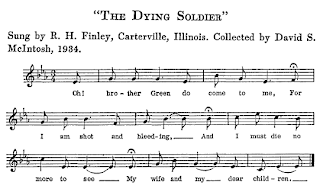 I was wondering if there might be a full scoring of the original tune. I am a music education major and would love to use this song with a student in solo study or with the choir as a whole.

I do not know of any but I will keep my eyes open!