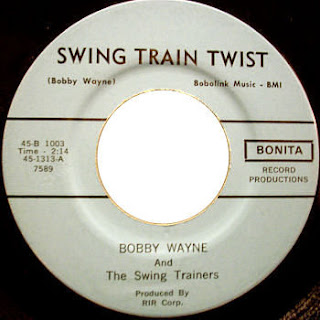 
Bobby Wayne's "Swing Train Twist" is a wild, primitive and action-packed rock and roll record. However, it achieved fame to a much lesser extent then similar songs would do in collector circles. Wayne is not to be confused with all the other singers of the same name, including Bobby Wayne who cut a slew of singles for California and Washington based labels. Virtually nothing is known about Wayne, only snippets of info are available.

"Swing Train Twist" was backed by "Twistin' Swing Train", presumably similar to the A side. The record was issued on Bonita Records (Bonita 45-1313) as by "Bobby Wayne and the Swing Trainers", a band that remains in obscurity. It was the year 1962 and rockabilly was dead - even rock'n'roll was vanishing. But Wayne didn't care, his "Swing Train Twist" is a wild rock'n'roll outing with a wild guitar break, a sax solo and outstanding vocals by Wayne. The rhythm section is working well, creating a stomping sound imitating a train very good. At the beginning of the song, Wayne is shouting several West Virginia cities like a conductor, including Charleston, WV.

According to a short Billboard mention in the "Country Music Corner" segment from 1964, the Bonita label just signed C&W artist Bill McDowell, who was the organizer of the "Coonskin Folk Music Festival" in Charleston and a former Rena recording artist. Probably Bonita Records was based in West Virginia, likely in Charleston. No other singles are known to be issued on the label but it seems that the company was active at least from 1962 to 1964. 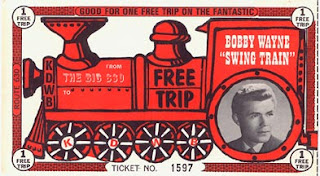 Bobby Wayne himself was a popular DJ on several stations. He had his own rock & roll show on WCAW in Charleston called "Bobby Wayne's Swing Train". Wayne apperently was keen on trains, since he used the train theme on his shows, his band, his songs. By August 1962, he had switched to radio station WGKV. In the years of 1964 and 1965, Wayne was at WSAI in Cincinnati, Ohio, and his "Swing Train" show was with him. 1966 saw him at KDWB in Minneapolis, he then left and returned to Cincinnati in 1968 and found work at WUBE until 1969. Also there, he presented his "Swing Train" show which proved to be very popular on both WSAI and WUBE. Wayne also spun records on WWHY in Huntington, West Virginia, KCBQ in San Diego in 1967-1968, and from 1969 to 1972 as "The Wizard" or Bob "The Wizard" Wayne in New York City on WCBS-FM, WYNY, and WHN.
Unfortunately, I have no info about his career after 1972. Bobby Wayne died in September 1990.

Thanks a lot for posting. This is something useful to me and my friends in the school newsletter and this kind of news helps a lot in the production. I also need a lot of clips as references.

i believe he make some recording in the 80's or 90's who were issued on a british cd.

Salut,
that was possibly the other Bobby Wayne of "Sally Ann" fame you are referring to jean-pierre. He recorded an album in 1981 on Piccadilly entitled "Outlaw" (issued in the UK) and one for Wild Fire in 1996 called "Go Rockabilly".

@Hanst, he's not the same. Rocky hasn't even listed "Swing Train Twist" in his discography.

I worked with Bobby Wayne at KCBQ from 1967 to 1968 while I was in high school. The station was based in Santee, east of San Diego, and I met him while shopping for my mom in the local supermarket. He made me the high school news-reporter for the station, and the backstage photographer for rock concerts sponsored by the station, so I have several vintage photos of him and the rock legends he introduced me to.

@Richard, that sounds interesting. I did an article on Bobby in 2012 and I sure would like to see those photos. Any possibility to seem them?

Hi @Mellow, I have a few pictures scanned, and I plan to scan more in the very near future.Would love to see the article you did, too. There's too little about him on the internet, and I'm afraid he'll be forgotten in history. I've been researching things from my past, and writing about the interesting people that changed my life in different ways, and he was a huge inspiration to my creative life. My email address is rp (at) richardpetersonphoto.com Send me an email and I'll send you some images! Thank you for the reply!

Listened to him as a kid in San Diego, one of the most talented radio talents ever. Wiz
did numerous voices and characters, probably one of the first Top 40 jocks to countdown
an underground Top 5 every night at 11 pm. He later went to NY, never knew he was a recording
artist. RIP Mr. Wayne.


So, the guy in the last photo with the cigarillo- I am certain is Robert Wayne Satterfield. See: http://www.findagrave.com/cgi-bin/fg.cgi?page=gr&GRid=55189194. I am confused; Is this this same Bobby Wayne who was signed by Columbia Records? http://www.rockabillyhall.com/bobbywayne.html. Sorry for my ignorance. I'm doing genealogy research and Robert Wayne Satterfield from the findgrave link provided is my late uncle. Thanks.

Robert Wayne Satterfield, your uncle, is the featured artist in this post. He started his DJ career in the early 1960s as "Bobby Wayne." He is however not the same Bobby Wayne who recorded for Mercury and Columbia.

If you want more info, sent me an email. (simply look at my profile page)

Hello, I am Bobby "Wizard" Wayne's widow. This record was a wonderful memory of his. He died too young, but lived his life to its fullest. I was Pat Satterfield for many years until remarrying. Bobby worked in NYC for many years. We worked together at WHN, then moved on to other stations. Yes, this was his record from his home state of West Virginia from the early 60's.
Pat Maxwell (formerly Satterfield).

Hi, This is Bobby Satterfield's daughter, Laura. It's lovely to read all of the fond memories of my father. He wasn't in my life much so to hear stories are wonderful. I would love to see any photographs of him back in the day. And yes, he did die too young. I was 21 when he passed away.

Thank you all for keeping his memory alive.

I'm from Fairmont, West Virginia, and will be 57 next June 10. I would call him at Long Island's WHLI. I learned of him in a book about country music. He was one time at my all-time favorite radio station, NYC's 1050 WHN. I've lived in Fairmont all my life, and it's about 8 miles east of his hometown of Farmington. He seemed to immensely enjoy hearing from me.

Thanks for all the comments.

@Laura and Pat: if you want to have some more material, you can send me an e-mail (see my profile page) or tell me yours and I'll contact you!

He was indeed the best dj . I am 75 but remember the 70s like yesterday. On WCBS 101.1 He once said Rod Sterling is amazing. on the Twilight zone . Never moves his upper lip!!! Very true .Very great D. J. and funny and New York D. J. cool. Bobby, you are missed R.I.P. Pat

When he was at WHN, he introduced a Freddy Fender song, he said "Here's Freddy Fender. I knew his brother, Ronnie Runningboard." This was on his first day there, and he was made to understand that neither the artists nor their music were to be made the objects of humor.