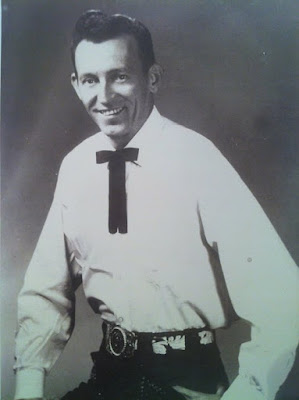 The name "Bozo" already suggests it, here have an artist that was not only a singer and DJ but also a comedian. Hailing from Louisiana, living in Texas in the 1950s and relocating to Arizona in the 1960s, Darnell achieved enough local fame to be mentioned infrequently in Billboard and to secure himself a little mention in country music history as the author of several songs recorded by the top names of the day.

He was born Robert Oswald Darnall on November 12, 1927, in Clarks, Louisiana, to Willie Dee Darnall and his wife Eldonia. Clarks, located in Caldwell Parish in the western part of the state, was a rural village and though only sparsely populated, it was one of the larger towns in the parish. He served his country after World War II, spending time on the Philippines.

By the mid 1950s, Darnall had made his way into music business and had adopted the stage name "Bozo Darnell". At some point, he had teamed up with his brother, appearing as the "Darnell Brothers". He was living in West Texas by then and had made Big Spring his home. The oil boom made the areas these flourishing and a small country music scene had developed there since the middle of the decade. Hank Harral, Ben Hall, Hoyle Nix, among other artists kept the music business running with DJ and live stage shows, clubs, record labels and recording studios. By 1955, Darnell appeared with such artists as West Texas DJ Ace Ball and the York Brothers.

A year after founding Jaybo, Darnell had moved his operations north to Jeffrey City, Wyoming, where he continued to release discs throughout the years 1960 and 1961. After an odd ball single for the Wyoming based Rawhide label, Darnell changed his label's name to J-Bo and by this time, he was probably living in Phoenix, Arizona.

In 1964, he was signed to Kapp Records and recorded one single for the label, "Your Steppin' Stone" b/w "Fool the World" (Kapp #696), which reached promising sales figures. Biff Collie, once legendary DJ in Houston and by then active in Los Angeles, was so impressed by the disc (according to Billboard in July 1965) that he signed a contract with Darnell to promote the disc. In August that that year, Darnell set out on a promotional tour and though sales and national distribution were promising, "Your Steppin' Stone" failed to reach the charts. By then, Darnell appeared on the WGN Barn Dance, the last version of the once famous National Barn Dance on WLS.

After his move to Phoenix, Darnell soon connected with the small but lively music scene that had developed in the city since the 1940s. He continued to appear as a singer and comic. In Phoenix, Darnell started to record for the local Ramco label, which also employed a local singer, guitarist, and DJ named Waylon Jennings as a studio musician sometimes. With Jennings, Darnell composed "Down Came the World," which Jennings recorded for RCA-Victor after he had relocated to Nashville. A couple of other songs written or co-written by Darnell were recorded by Nashville country stars but the big break, neither as an recording artist nor as a songwriter, came.

In the early 1970s, Darnell and a befriended songwriter from Phoenix, Jack Gunter, worked with country star Wynn Stewart, who was struggling achieving hits at that time, however. Several of Stewart's RCA recordings were written by Darnell. Gunter also recorded Stewart for his Copre label (for which Darnell also recorded in 1974) and licensed the results to Atlantic.

Darnell recorded a couple of more singles for small Texas based labels until the mid-1970s, before he ceased recording. He also released two albums at unknown dates, however. Bozo Darnell died September 12, 1997, in Burkburnett, Texas, at the age of 69 years.

If anyone out there has more information on Bozo Darnell, feel free to pass it along.