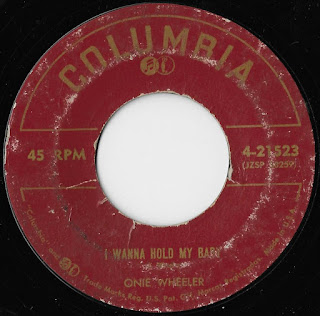 Onie Wheeler was a curiosity in country music. With a voice and style ahead of his time, Wheeler dabbled in country music, bluegrass, gospel, and even rock'n'roll. He was on its way to fame in the mid 1950s but took a detour that prevented him from stardom. He was rewarded with a chart hit not until the 1970s, when he hit with "John's Been Shucking My Corn". However, he is best remembered by collectors for his 1950s and early 1960s recordings.

The following biography of Onie Wheeler will be published in extended version as part of a special Vaden Records issue of American Music Magazine.

Wheeler was born Onie Daniel Wheeler on November 10, 1921, in Senath, Missouri, to Daniel Washington Wheeler (1978-1948) and his wife Clara (1882-1926). Growing up with four siblings, their mother died early and father Daniel had to raise the children alone. The Wheelers lived in Kennett, Dunklin County, by 1930, near to the Arkansas-Missouri state border. Wheeler took up the guitar but it was the harmonica that really became “his” instrument. He would take it out into the farming fields, where he would play while plowing.

While in high school, Wheeler won a talent contest and he would win several more during his stint with the US Army. He enlisted in 1940, still 18 years old, and was stationed at Pearl Harbor, Hawaii. He was one of the survivors of the Japanese attack in December 1941. He remained in the Pacific area and suffered injuries on his fingers, which limited his guitar playing to picking and playing an open G chord and bar-chording the guitar.

Upon his discharge in 1945, Wheeler decided upon a living as a country music performer and travelled the tri-state area of Missouri, Arkansas, and Tennessee during the years after the war. By 1949, Wheeler had made the move to Flint, Michigan, where he was working at a car assembly plant for earn a living for his family, which included daughter Karen (born 1947) by then. On weekends, Wheeler and his wife would perform with a band called the Lonesome Ozark Cowboys (the name being a resemblance to their home state region). The outfit made some recordings in 1949 at radio WWOK in Flint that saw release on the small Agana label: “Shackles and Chains” b/w What’s Wrong with My Daddy” (#1352/3) and “Too Young to Marry” b/w “You Shattered Many a Dream” (#1354/5).


Back in Missouri, Wheeler met brothers and guitarists A.J. and Doyle Nelson and drummer Ernest “Ernie” Thompson, who would become the core members of his band for the next years. Travelling to Nashville in 1953, Wheeler and his band became acquainted with Troy Martin, who helped the group to gain a recording contract with OKeh Records, at that time part of the Columbia label empire. As a reward, Martin got half of the songwriting credits on four of Wheeler’s original tunes. Supported by fiddler Jerry Rivers, the band recorded their first session on August 29, 1953, at the Castle Studio. It produced “Run ‘Em Off” and “Mother Prays Loud in Her Sleep.” While the latter became a minor classic in bluegrass gospel music and one of Wheeler’s own standards, “Run ‘Em Off” was covered by Lefty Frizzell and it became a #8 country hit for him.


After having a couple of follow-up singles on OKeh, Wheeler switched to its main label Columbia in 1954 and continued to record sessions in Nashville. Wheeler’s deep voice, his harmonica playing and often up-tempo song material created his very own, unique sound. Besides that, his regular band was allowed to back him on recordings, which was unusual at the time in the Nashville music business.

Today's selection "I Wanna Hold My Baby" and its flip side, the novelty "Onie's Bop", was recorded on April 1, 1956, at Music City Recording in Nashville. It was Wheeler's first session since October 1954, when he had recorded at the Tulane Hotel. The line-up consisted of Wheeler on vocals, Grady Martin on lead guitar, Ray Edenton on rhythm guitar, Bob Foster on steel guitar, Ernie Newman on bass, and Buddy Harman on drums. Both songs were the only products from this session and releases on Columbia #4-21523 in early summer 1956.


The disc soon became a good seller for Wheeler and even became Columbia's second bestselling C&W record at the end of July 1956. "Onie's Bop" received lots of airplay in areas as far away as Rosarito Beach, Mexico. However, the song did not enter Billboard's national country music charts.

Wheeler recorded for Sun Records in Memphis during the late 1950s but chart success eluded him. He would not record again until 1960, when John Capps recorded Wheeler for his K-Ark label, which had been founded a year earlier.

While Wheeler had made his home in Missouri previously (which was not beneficial for his musical career), he made the move to Nashville in 1962, when he and his daughter signed a recording contract with Epic. This deal would only last for a short while but Wheeler kept on recording for other Nashville based labels during the 1960s, including United Artists, Musicor, Starday, and K-Ark. Also in 1962, Wheeler had joined Roy Acuff’s band, playing tours and the Grand Ole Opry for the next two decades. Besides, he operated a guitar repair shop when not performing. Karen Wheeler also established herself as an independent artist and would record and perform under her own name as well as part of the Harden Trio.

After being nearly 30 years in the music business, Wheeler was finally rewarded with a hit. In March 1973, the Royal American label picked up his “John’s Been Shucking My Corn” (which had been originally recorded for Wheeler’s own Ole Windmill label) and the song peaked at #53. A follow up as well as an album was recorded but success went as sudden as it came.

Wheeler continued to record with minimal success well into the 1980s. He and his longtime accompanists, the Doyle Brothers, recorded a couple of gospel songs that were planned for release. In early 1984, he underwent a surgery that went well and he was back on stage in May that year and on May 25, he and the Doyles played Reverend Jimmie Rodgers Snow’s Grand Ole Gospel Time in front of a 1.500 crowd. While singing “Mother Prays Loud in Her Sleep,” he suffered a heart attack right on stage. Rushed into a hospital, it was already too late. Onie Wheeler was pronounced dead on May 26 at the age of 62 years.

Sources
• As mentioned earlier, this biography is an excerpt from a detailed Vaden Records special for American Music Magazine. All following sources were also used for the original text.