Foghat on Bearsville / Foghat in Arkansas 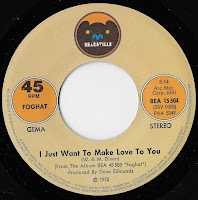 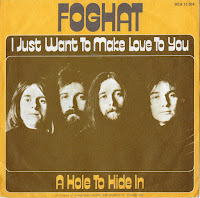 Foghat - I Just Want to Make Love to You (Bearsville BEA 15 504),
1972 (German pressing)
The hard rocking blues / boogie sounds of English rockers Foghat seem to be out of place for this blog but their musical roots, blues and 1950s rock'n'roll, are nothing but appropriate to feature this band here. As I developed a special interest in Arkansas music history, I thought it would be interesting to examine the personal appearances of one of my favorite rock bands in the Natural State.

Foghat was actually an off-spring of Kim Simmonds' Savoy Brown Blues Band, a group that had emerged in London in 1965. The line-up changed over the years and by the late 1960s, three of the members were part of Savoy Brown who later founded Foghat. It were "Lonesome" Dave Peverett on guitar and vocals, Tony Stevens on bass, and Roger Earl on drums. Thanks to a busy touring schedule, Savoy Brown became more popular in the US than in Great Britain, which presented the trio of Peverett, Stevens, and Earl with their first touring experiences in North America.

However, in late 1970, they decided to leave Savoy Brown (leaving Kim Simmonds as the only remaining member) and founded the band Foghat. With the addition of lead slide guitarist Rod Price, the group was complete. With Peverett's passion for 50s rock'n'roll and a guitar style reminiscent of Chuck Berry's as well as Price's great love for the blues, their hard rocking, stomping boogie blues sound was born. The band signed with American Bearsville Records and had their first self-titled album out in July 1972. It entered the US charts soon and a tour across the States was started. Eventually, the band relocated to the United States full time due to their ongoing success there. In Europe, the band was largely overlooked, although single and album releases were available in several European countries.

The "Foghat" album featured a cover of Willie Dixon's "I Just Want to Make Love to You", which had been recorded first by Muddy Waters in 1954 for Chess Records (a #4 Billboard R&B hit). Waters would record it again in 1968 for his album "Electric Mud". While the original was a slow number in the best tradition of the Chicago blues style, Foghat speeded it up and introduced it with a thumping bass run by Tony Stevens. The song was released as a single in the US and Europe with "A Hole to Hide In" on the B side and reached #83 in the US and #31 in Australia. "I Just Want to Make Love to You" became one of Foghat's signature songs that they played at probably every concert. In 1977, the band released a live album aptly entitled "LIVE" and the resulting single release was the live version of "I Just Want to Make Love to You", which peaked at #33 in the US and at #28 in Canada.

During the next years, the band enjoyed some chart success with their following albums and cut cover versions of rock'n'roll and blues standards for every record: Chuck Berry's "Maybellene" also for their debut (1972), Chuck Willis' "I Feel So Bad" for "Foghat (Rock & Roll)" (1973), Big Joe Turner's "Honey Hush" and Buddy Holly's "That'll Be the Day" for "Energized" (1973), Robert Johnson's "Terraplane Blues" for "Fool for the City" (1975) or Johnson's "Sweet Home Chicago" and Tampa Red's "It Hurts Me Too" for "Stone Blue" (1978). Some of them, like "Honey Hush" or "Maybellene", became part of their routine live repertoire.

One of their biggest successes came in 1975 with their album "Foor for the City", produced by Nick Jameson, who also joined the band as a bass player from 1975 until 1976. The album's single, "Slow Ride", became a #20 hit that year in the US (even # 14 in Canada) and a minor rock classic.

Foghat was known to have a restless touring schedule, which made them one of the hardest working bands in the US and a popular live act. During their classic years, they played six concerts in Arkansas, all of them in Little Rock. "I Just Want to Make Love to You" was probably part of the set list for every of their gigs there. Here is an overview of their concerts in Arkansas:

Following their last concert in 1983, the band did an autograph signing at Hickey's Sports on Cantrell Road. Some of the songs they played included "Stone Blue", "Fool for the City", "Third Time Lucky", "Slow Ride", and of course "I Just Want to Make Love to You".

In 1984, Foghat disbanded. By then, line-up changes had occurred following the leaving of Tony Stevens in 1975 and Rod Price in 1981. The band reformed in 1994 and is active to this day under the leadership of drummer Roger Earl, who appears to be the only original member of the group nowadays. Dave Peverett has passed away in 2000, Rod Price in 2005 and long time bass player Craig MacGregor in 2018. Since the beginning of the new century, Foghat has performed two shows in Batesville, Arkansas, and one in Hot Springs, Arkansas.

1974 live appearance by Foghat on Don Kirchner's Rock Concert TV show, performing an extended version of "I Just Want to Make Love to You" (with parts of Bo Diddley's "Who Do You Love" thrown in)
Sources
• Foghat set and concert list
• Foghat Wikipedia entry
Eingestellt von Mellow on 8/17/2022