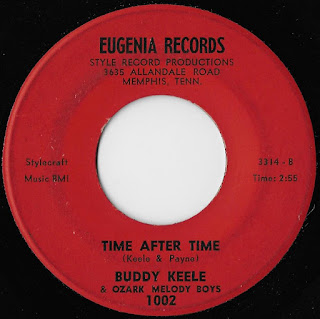 I have featured the flip side of this record a few months ago and thought I'd share this side, too, as I was able to dig out some information on the artists.

Apparently, Jack Keele and the Ozark Melody Boys hailed from Missouri. Carvin Campbell "Jack" Keele was born on August 25, 1918, in Illinois. However, his father, Arthur Lucien Keele was born in Missouri and by the time Jack Keele was two years old, the family had moved back to that region. It seems that Keele spent most of his life in Missouri and by the mid 1950s had assembled a country band named "Ozark Melody Boys".

In the mid 1960s, they got the chance to record for Style Wooten in Memphis and cut "Memories of You" / "Time After Time" for Wooten's Eugenia label (#1002). The vocalist on this record was Buddy Keele, one of Jack Keele's children. Buddy and Jack remained active in the music scene and in 1975, Buddy Keele cut another single record for the NSD (Nashville) affiliated Carvin record label, likely owned by Jack Keele. The single featured "Walking Into Your Life" b/w "Tell Me a Lie" (Carvin #101).

Jack Keele died on March 21, 1983, and is buried in Poplar Bluff, Southeast Missouri. I only found access to these information as Jack Keele's grandson posted a short comment under my first post on his father's group and revealed his identity.

Mellow the mp3 seems to change to another song at 1m 10 seconds? Pity I was enjoying the boppin' sound. Dean

Dean, I have updated the link with a new sound file!