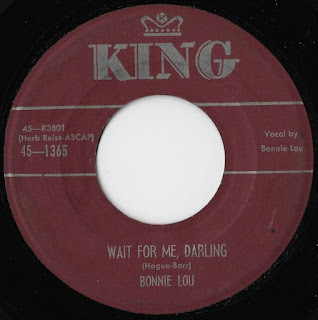 Bonnie Lou - Wait for Me, Darling (King 45-1365, 1954)
Bonnie Lou was a star of WLW from the 1940s up to the 1970s and had a few hits in the 1950s, mixing country with R&B on many of her recordings for King Records. Apparently, she was one of the first women to sing rock'n'roll or rock'n'roll tinged songs. Today we feature one of her country releases for the label.

She was born on November 27, 1924, in central Illinois as Mary Joan Kath. She spent her early years in Towanda, Illinois, but when the family's home burned down, they relocated to Carlock, where Kath's father worked as a farmer. She was interested music already as a child and initially learned violin before taking up the guitar at the age of eleven years. Influenced by such cowgirl singers as Patsy Montana or the Girls of the Golden West, she learned to yodel from her grandmother (who originally hailed from Switzerland and had immigrated to the US).

In 1939, at age 15, Kath had her first radio appearances under her given name and also soon played public appearances. A year later, she was part of Bill Barlow's Kentucky Ramblers and upon finishing high school in 1942, she moved to Kansas City a year later, where she appeared on radio KMBC as "Sally Carson". She played such programs as the Dinnerbell Round-Up and the station's big live stage show, the Brush Creek Follies.

In 1945, Kath transferred from KMBC to WLW in Cincinnati, Ohio, and it was there that she took the stage name "Bonnie Lou" (which she got from fellow WLW performer and station executive Bill McCluskey). At WLW, Kath featured her own band, known as the Trailblazers, and soon became a regular performer on the station's successful Midwestern Hayride. Her popularity grew through the years and in 1953, she signed with the local independent label King Records. Already her first release, "Seven Lonely Days" b/w "Just Out of Reach" (King #1192, March 1953), became a #7 country hit.

Kath had a follow-up hit that same year with "Tennessee Wig Walk" (#6) but was absent from the charts the next two years. "Wait for Me, Darling", an uptempo country side, was recorded May 30, 1954, at the King Recording Studio with an unknown band. King coupled the song with another recording from the same session, "Blue Tennessee Rain", and released it on King #1365 in June 1954. However, the disc did not reach the charts.
Despite her popularity on the Midwestern Hayride and guest appearances on the Grand Ole Opry, her next hit came not until fall 1955, when her "Daddy-O", a R&B flavored country number, reached #14 on Billboard's charts. She had another hit with "La Dee Dah" early in 1958, a duet with fellow King recording artist Rusty York. Her records were also released in Europe, including successfully in England. Two of the reasons that she never achieved enduring chart success may have been the facts that WLW did not let her take off from the station to go out on tour and promote her records and, to her own account, that she mixed country and R&B genres, so people did not know which style she was actually singing.


After her King contract expired, she signed with local Fraternity Records, as she did not want to leave Cincinnati, and released two unsuccessful singles, including the rock'n'roll number "Friction Heart". In the following years, she would also record for Todd, Studio 4, and Wrayco. When television became more popular than radio, she made the transistion from WLW to its TV counterpart WLWT and starred in the TV edition of the Midwestern Hayride until its ending in the 1970s. She also became part of various other TV programs of the station, including the Paul Dixon Show. After Dixon's death in 1974, she semi-retired from TV and music business, only performing occasionally.

She hosted a country radio show on WPFB in Middletown, Ohio, during the 1980s. Mary Joan Okum (she had married her second husband Milton J. Okum in 1966) aka Bonnie Lou passed away December 8, 2015, at the age of 91 years in Cincinnati.