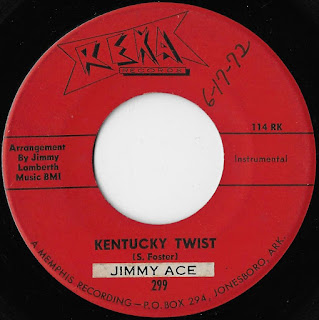 Jimmy Ace - Kentucky Twist (Reka 299)
Reka Records was the small outlet that saxophone player Jimmy Lamberth operated out of his hometown Jonesboro, Arkansas. Active between 1959 and 1964, the label issued a bit more than a handful of releases, all of them from local talent and commercially unsuccessful.

Lamberth was born in 1927 in Jonesboro and came - contrary to most of his fellow musicians - from a trained and more sophisticated musical background. He played jazz in different bands but eventually would also perform with country combos in the Memphis and Arkansas regions. He was not eager to record or score a hit but nevertheless cut a session for Lester Bihari's Meteor label in 1957, which produced the single "Latch on to Your Baby" b/w "I'll Pretend" (Meteor #5044). In the late 1950s, he also worked with piano rock'n'roller Teddy Redell and backed him up on a couple of sessions for Vaden Records.

In 1959, Lamberth set up his own label, Reka Records, and made Jonesboro its headquarter. However, he would record most of the singles in Memphis, as he would often print on the labels ("A Memphis Recording"). The debut was a release of the owner himself with "Reelin' and Rockin'" b/w "Harbor Lights" in 1959. He would cut two more releases for the label (also as "Hank Hankins").

This particular release was issued twice. The first edition was Reka #298 by Jimmy Lamberth, hiding under his pseudonym "Hank Hankins". He turned the old Stephen Foster tune "My Old Kentucky Home, Good-Night!" into a wailing rock'n'roll instrumental and reworked the Delmore Brothers hit "Blues Stay Away from Me" in the same way (with vocal support, however). He subsequently used the same masters for #299 and re-released them under the name of fellow sax man Johnny "Ace" Cannon. Cannon likely did not perform on these cuts, as Lamberth was the sax man himself, but he probably thought, it would be a good idea to release the songs under Cannon's name, as Cannon was riding high on the charts with his own version of "Blues Stay Away from Me" in 1962. Interestingly, some copies of #299 have a sticker over the artist name with Jimmy Ace on it. This was done possibly due to contractal restrictions as Cannon was tied to Hi Records.

By the mid 1960s, the label had become dormant and in the 1970s, Lamberth became a missionary evangelist for the Phillipines and kept this occupations well into the 2000s. He died 2016, aged 88, in Jonesboro.

If you have additional info on Jimmy Lamberth, Reka Records, or artists that recorded for the label, feel free to contact me.