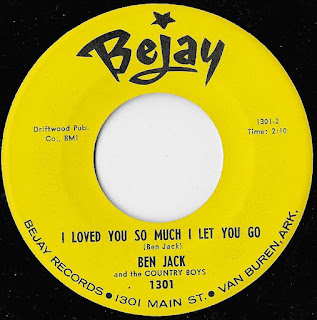 Ben Jack and the Country Boys - I Loved You So Much I Let You Go (Bejay 1301), 1962
One of the small record entrepreneurs that orignated out of Arkansas was Ben Jack, a part-time musician, who built his own recording studio and label. Jack allowed himself to have the debut release on his own label, Bejay (the name coming from Jack's initials B and J) that eventually served as an outlet to release the custom recordings he made at his studio. Actually, Jack became a local celebrity mainly because of his music shops in the Fayetteville region.

Jack was born Ben Hoyt Jack on December 27, 1933, to Frank and Rena Helen Jack. Jack's father Frank owned the local Jack's Motor Company in Van Buren. Ben Jack was musical inclined and learned to play pedal steel guitar at some point. It is said that he once performed with the likes of Bob Wills and Hank Thompson. By the 1950s, Jack was playing locally with a band. In 1959 and 1960, Jack and group recorded some country songs for Leon McAullife's Cimarron label.

By the the early 1960s, Jack was also dabbling in recording and producing techniques, establishing his own recording studio in Van Buren. Out of this studio, he also operated his own Bejay label. The first release came in 1962, two country songs by Jack and his band: "I Don't Want to Go" b/w "I Loved You So Much I Let You Go." More releases followed but a fire destroyed the recording studio, causing Jack to move across the Arkansas River to the city of Fort Smith. There, he rebuilt his studio in an abandoned garage, turning it into a modern recording studio with top notch gear of the time.

Although electric guitars were already popularized in the wake of rock'n'roll music in the mid 1950s, the mid 1960s saw a boom of electric amplified guitars due to the success of the Beatles and what followed as the "British Invasion". In 1965, Jack and his wife Shirley (1938-2017) decided to open up their first music store in Fort Smith, "Ben Jack's Guitar Center", which featured a guitar repair shop in the back and a music store selling guitars and other instruments in the front. The store became a success and a year later, the Jacks opnened a second store in Fayetteville. They eventually sold their store in Fort Smith (however, it retained Jack's name) but established more branches in Rogers and Bentonville. Ben Jack's stores became an institution in Northwest Arkansas, one of the most venerable and popular spots for musicians and those who wanted to become an accomplished one. The staff included only the most versatile musicians of the region, inlcuding Earl Cate, a local guitarist who had played with Ken Owens and the Del-Rays and his own band, Bruce Grubb, who worked for the Jacks for more than 20 years, or Larry Stark.

Jack continued the run his recording studio through the decades well into the 1980s. Mickey Moody was the studio's manager for years. Countless sessions took place in this studio, giving local musicians and bands the opportunity to release their own material. Some of them saw release on Bejay but many LP productions were published on small private labels.

Jack also owned one of the largest privtae collections of vintage guitars, was active in the charity field and other local businesses. He died unexpected on November 6, 2009, at the age of 75 years in Fayetteville. He is buried at Gill Cemetery in his hometown of Van Buren. Following his death, stores were closed exept for the Fayetteville branch. It was sold by Shirley Jacks in 2014 to Don Nelms and family, who run a local car dealership. Nelms and his chief financial officer Roy Shorter are also local musicians and songwriters. Shirley Jack died in 2017.