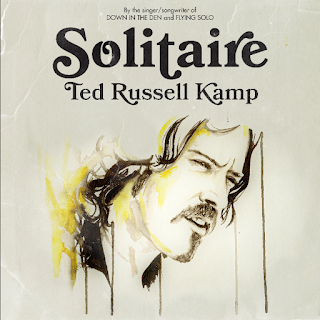 When I first learned of Ted Russell Kamp’s new album “Solitaire,” it dawned on me that I had to have this album. I was familiar with Kamp’s name through my fondness of Shooter Jennings, for whom Kamp played bass for years. However, Kamp has been active as a solo artist as well as producer and has released several albums over the years.

In May 2021, his new work “Solitaire” was released on Continental Song City. To be honest, I expected it to be something different. I have been familiar with all of Shooter Jennings’ work and thought, Kamp would deliver something in the same manner but it turned out to be quite different. “Solitaire” is calm, quite, soft and seldom the songs are pushers. This might be because Kamp recorded it mostly at his home during the pandemic months. It is an album to sit down, settle down, and listen.

To my ears, highlights of the 14 tracks strong record include the opening track “My Girl Now,” “You Can Go to Hell, I’m Going to Texas,” “As Far As the Eye Can See,” “Western Wind” and the great “Lightning Strikes Twice.” Kamp himself performed many of the instruments, although he also assembled a group of musicians that support him on different tracks. The sound is acoustic in its best sense, it’s pure and it’s grounded. In my very personal opinion, a few faster paced songs would have enhanced the track selection but the judgement is probably up to each individual.

Nevertheless, Kamp delivers an extremely well-produced and coherent album and I surely will occupy myself with more Ted Russell Kamp material.