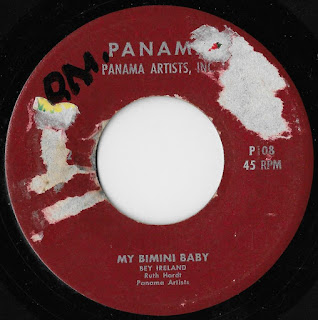 Following my recent post, in which I explained the general facts about the flip side of this disc, regarding song titles, songwriter, artists and record label - we will go deeper into the history of one of the artists, Bey Ireland namely.

The man with the strange sounding name was apparently a South Florida resident in the 1950s. He first appeared on Prom Records, which was part of Henry Lapidus' Synthetic Plastics record empire out of Newark, New Jersey. The budget label, which featured cheap versions of the actual hits of the day, was renamed "Promenade" in 1956. Ireland cut a few songs for the label in late 1955, including a cover of Georgie Shaw's hit "No Arms Can Ever Hold You." The recording was paired on Prom #1133 with "Dogface Soldier" by Maury Laws and his Orchestra on the slip side. It was also released on a Prom EP #701 at the same time. In 1956, he appeared with a version of "To You My Love" on Prom EP #714.

About three years later, Ireland began recording for Harold Doane. Doane ran the American Recording and Transcription Service (often shortened to ART) in Miami and had made himself a name with the first commerical recordings of goombay and calypso music in the early 1950s. By the mid to late 1950s, Doane also recorded local rock'n'roll as well as country acts and released the results on his three small record labels: Art, Perfect, and AFS. Ireland first cut a disc for AFS, featuring "Old Chuck Wagon" b/w "A Stocking Full of Love" (AFS #304, 1958), accompanied by the Stardusters. Likely that same year, he followed up on Art with "Snap, Crackle and Rock" b/w "Baby Sitter's Rock." Both songs were written by Ruth Hardt (see the previous post for more info on her) and Ireland's versions were rollicking rock'n'roll performances. He was again backed by the Stardusters as well as the Tommy Miles Trio. As Doane's companies had no financial means to put behind the releases, both records stood no chance on the national market. If at all, they were good local sellers.

About a year later, Ireland recorded Ruth Hardt's "My Bimini Baby" and "Popcorn and Candy Bars." They were issued on Herb Wolff's Panama label in Miami. However, success eluded Ireland again and at some point afterwards, he made the move to Nashville, epicenter of the country music industry. Or, at least, he recorded exclusively for Nashville record labels from that point on. It is likely that his extensive tour activies also began around this time.

In 1964, Ireland appeared on the RIC label with one single, followed by "You Gotta Have That Feeling" b/w "Someday I'm Gonna Go Back Home" for the Newport label in 1966, a snarky rock'n'roll and country flavoured garage outing. While Ireland had relied on other people's song material previously, he had begun recording his own compositions by then. All in all, he registered a total of 13 songs with BMI over the years. Also in 1966, he cut "All I Want for Christmas is a Go-Go Girl" for Newport, which developed some underground fame in present times due to the its lyrics and the rocking garage sound. He had another disc on Newport, one on JED and possibly his last one on the country label NSD in 1981.

Ireland toured extensively with his band across the south during the 1970s and 1980s. We last find mention of him in the Alabama Journal on December 31, 1985, as he played a dance on New Year's Eve in Montgomery. By that time, he had possibly settled in Alabama, as he was also billed as "The Alabama Flash" on the picture sleeve of his JED single. What happened to him afterwards has not been revealed yet. There are hints that he already passed away.