The Story of "You Can't Have My Love"

1954 was a watershed year in Country Music following the death of Hank Williams. At least 50% of the Billboard Hot Country Singles could now be considered what we call "Country Classics". This isn't one of them but was very popular at the time. The song is "You Can't Have My Love" and was in the Billboard charts for eight weeks starting on July 24, 1954, reaching a peak at number eight . It generated a lot of interest and airplay and was on the jukeboxes upon its release in May of 1954. It was 17 year old Wanda Jackson's first record release as well. Here's the whole story. At the beginning of 1954, Hank Thompson had discovered Wanda Jackson on an Oklahoma City radio station, where she had a program, and added her to his band on weekends as a featured vocalist as was Billy Gray, who also played lead guitar and was the bandleader of the Brazos Valley Boys for Hank. March 22 through 24, 1954, saw Hank and the entire band in the Melrose Avenue studios of Capitol Records in L.A. On the last day of the session, Thompson booked recording time with Capitol to make demo tapes of both Wanda Jackson and Billy Gray and the duet "You Can't Have My Love" to try and influence his producer at Capitol Records, Ken Nelson, to sign them to Capitol record contracts without success. Nelson demurred for a variety of reasons, not the least of which was that Wanda Jackson being underage.

A short time later, Hank Thompson was in Nashville and took a meeting with Paul Cohen, then head of Nashville's Decca Records operations and upon hearing the demo tapes signed Billy Gray and Wanda Jackson to two year contracts on Decca Records. Decca Records, at the time was the leading recording company in the USA with hundreds of records of all kinds being cranked out of their factories constantly and generating millions in revenue giving Decca the opportunity to sign unknown and untested talent, and they did so frequently. Cohen, always looking for a way to sell more records had minor league artists record a cover version for Coral Records, a subsidiary label, on April 8, 1954, to sort of hedge his bets. He did this frequently with leased records that came to Decca, so it was nothing new. Texas Bill Strength, an itinerant but well know country music D.J. and sometime country singer on Coral since 1951 and Tabby West, a converted pop music vocalist, hyped as another Kitty Wells (which she wasn't) and being on Coral since 1952, recorded their version at Bradley's Barn in Nashville and held back as a "B" side, just in case. More on that version later. 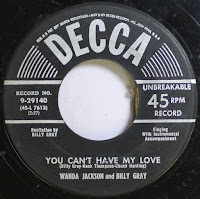 Billy Gray had written "You Can't Have My Love" along with co-writers listed Hank Thompson and Chuck Harding (Yeah right. editorial comment) especially as a vehicle for him and Wanda Jackson, she with her tough-as-nails vocal and his smooth recitation as counterpoint struck a true chord with everybody, especially in Oklahoma and Texas, and soon the entire country was listening to it on the radio and more importantly buying copies for jukeboxes and homes.

The Texas Bill Strength/Tabby West version (Coral 64177) was released shortly afterwards with "With Let's Make Love Or Go Home One" as the "A" side which didn't make much headway with such a risque title for the times. The Texas Bill Strength and Tabby West "A" side was cute and had a great banjo solo very much in the style of Joe Maphis, who may or may not have played on the record. 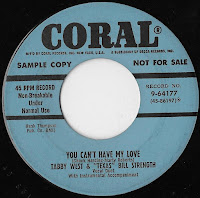 The "B" side, which was "You Can't Have My Love," was also somewhat different in that it changed the girl singer's state to Missouri and cities listed were all pretty much in the Mississippi valley - Dyersburg, Tennessee; Fort Smith, Arkansas; and Cairo, Illinois (pronounced K-Row) - and a small coda was added at the end which was humorous. I have no idea why this was done except that it might appeal to record distributors and D.J.'s in those areas. Decca marketing was ahead of the field most of the time and if they could sell a few more records they would. This version actually did nothing to further the careers of Strength or West. It was Strength's last release on the label. West had one more release and then let go, only to be signed to the big label, Decca, the following year after she joined the KWTO Ozark Jubilee. A little later both Tabby West and Texas Bill Strength recorded for Capitol Records to no success. By 1961, Tabby West had gotten out of the music business. Texas Bill Strength had an unsuccessful session with Sun Records which went nowhere, but he continued on as a successful D.J. and comedian and continued to record sporadically.

The third version of this song was recorded at King Records in Cincinnati, Ohio, and produced by Henry Glover, probably after the other versions were starting to get attention by mid-July 1954 and the "Jack" in the title was probably Jack Cardwell, who recorded for King and was recording there at about the same time. It sounds like him. This is the 45 RPM recording I've owned since 1955.

Elaine Gay is something of a mystery to me. Henry Glover recorded her in 1954 and released a few records over the year on DeLuxe, a King label, including her last release of a tipid country version of "Rock Love" which was written by Henry Glover and recorded variously by Lula Reed, Little Willie John, and the big Pop version in early 1955 by the Fontane Sisters on Dot Records. A small Billboard magazine note deep in the pages of that mag, mentions that Elaine Gay was from Miami and the local Miami record distributorship was trying to make something happen for her and it just didn't happen. No other information on her has ever surfaced. Her version with Jack was a direct copy of the Wanda Jackson-Billy Gray version. Not a bad record for a cover. 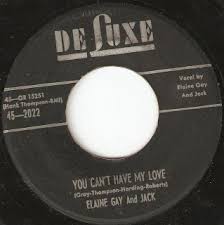 The song was in the Billboard charts into mid-September 1954 and was mentioned on the Billboard and Cash Box playlists on both radio and jukeboxes well into the fall.

Later on in 1954, Big 4 Hits, the mail order sound-alike EP record company also in Cincinnati, released this song as part of Big 4 Hits #98 by Eileen Nunn and Eddie Moore. This version was like the Texas Bill Strength - Tabby West version also with the coda. This was the first version I ever owned as I got a three speed record player for Christmas of 1954 and a package of 6 EP's from WCKY - also in Cincinnati - to play on the new player. That version has been long gone from me for several years, sorry to say. Early in 1955, I started buying 45 rpm records from my local distributor for the price of 10 cents apiece that never made it to his jukeboxes and started my, then, rather large 45 rpm collection, which was heavy on R&B and off-the-wall country music.
Eingestellt von Mellow on 5/31/2017

Email ThisBlogThis!Share to TwitterShare to FacebookShare to Pinterest
Labels: bobsluckycat

Auchtung! Auchtung! I have been hacked good from Germany. It has diverted my e-mail address to a German location and changed the password. So I have no access to the contents. I do have my imported websites still, such as yours.

My Contacts are beyond reach. Please e-mail me at my new e-mail address, so I get recapture your e-mail address. I'm now newbobsluckycat@gmail.com