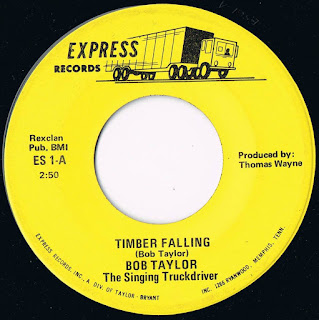 
The great quantity of artists with the name "Bob Taylor" in the music business makes it hard to tell who is who. This one, and this is pretty sure, was a local Memphis artist. However, several persons with this name appeared over the years in the Memphis music scene and it is again difficult to tell them apart (if this is necessary at all).

Today's Bob Taylor was born Robert R. Taylor and recorded at least five records for the Express label (likely his own imprint), another two for Gene Williams' Cotton Town Jubilee Records and one for Style Wooten's Tentay custom label.


In 1963 and 1965, Taylor had two releases respectively on Cotton Town Jubilee in West Memphis. These discs were his debut recordings. Taylor possibly appeared on Gene Williams' Cotton Town Jubilee show as well. Through Williams, Taylor made the connection with Style Wooten, who made his first steps in the recording production business at that time. In 1965, Taylor recorded for Wooten's Tentay label "After the Trial" b/w "Like a Crazy Fool" (both Rexclan Publ.). This is what we know for sure.

The chronology of Taylor's Express singles is not clear. The first one was probably the sentimental "Timber Falling" b/w "It's All Over Now," which was produced by Thomas Wayne at a Nashville studio in 1969. The disc was pressed by Wayne Raney's Rimrock plant in Concord, Arkansas. The record label credits Taylor as "The Singing Truck Driver" and shows a truck as the label's logo. It is obvious Taylor held a day job as a truck driver.

Jimmy Hunsucker, a country music singer, accompanied Taylor to Nashville to cut "Timber Falling," which was based on a true story, as Taylor reinforced several times to Hunsucker. Aside from Thomas Wayne, A&R man Scotty Moore was also present as well as musicians D.J. Fontana on drums and Weldon Myrick on steel guitar to back up taylor. The vocal group of the then newly aired TV show "Hee Haw" provided background vocals. Taylor wanted the song to be perfect and they recorded it over and over again that day. On the same session, Hunsucker recorded "I Feel a Good One Coming Up" and "Lonely World," which was released on Style Wooten's Camaro label shortly afterwards (Camaro #3392, 1969).

Four more discs on Express followed. Publishing was credited to Rexclan Publishing Company, which has 22 compositions listed by BMI, the majority of them by Bob Taylor. It can be assumed Express as well as Rexclan were both Taylor's own companies.

There was also a Bob Taylor who played drums with Narvel Felts in the 1950s and another one who became president of the Memphis Federation of Musicians. Murray Nash also recorded a singer named Bob Taylor on his Do-Ra-Me label in 1963. All three could be the same Bob Taylor from Memphis, which has to be proofed yet.

Additions. Express ES 2 Ode To Jimmy Hoffa / Our Country Has Had It, Express 713 Don't Accuse Me / Blue Lights, Express 714 Hall Of Fame / You'll Never Want For Love, uncertain if this one is by the same Bob Taylor Relco R 2082 Coming Home To Stay / Less And Less (I Remember Yesterday)

I can tell you anything you need to know about Bob.
I was with him when he recorded “Timber falling.”
It was recorded on music row in Nashville, Tn.
The A&R man was the well known Elvis first guitar player Scottie Moore.
The drummer was EP’s first DJ Fontana, Weldon Myrick on steel, can’t remember the others.
The backup singers were all the “Hee-Haw singers.
Thomas Wayne did produce all our songs there that day.
Only a short time after that Thomas was killed in a car wreck on the way to his hometown of Batesville, Ms.
Bob only did that song there. He liked to never got it right.
Finally took so long the backer made Wayne sing it so the backups could leave because they worked by the hour.
I recorded two songs that day “Tonight I feel a good one coming on” and “Lonely world,” we’re on Style Wootens Camaro label. On YouTube.
I sat at styles kitchen table many times getting things together. He was slow as Christmas.
Anyway, just saw this and it took me back to 1969 when we did it.
Bob swore it was a true story.
He also sued Bob Neal popular artist for stealing his country music hall of fame lyrics.
Either a coincidence or what but the hit record was bad close to Bob’s original words,
Never knew how it came out,

Hello Jimmy! Thank you for all the additions. And sorry for my late reply.