Moon Mullins and the Night Raiders 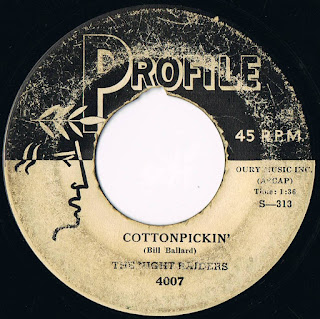 Moon Mullins and the Night Raiders

Much has been written of the critically highly acclaimed recordings of the Night Raiders. Their songs are cult favorites among rock'n'roll collectors today and bestowed a place in rock'n'roll history upon the group's singer and pianist Mickey Hawks. Much lesser known is the band's founder and manager Moon Mullins, who led the Night Raiders for more than ten years.

He was born Caswell Dallas "Moon" Mullins on August 15, 1937, to Caswell Burl Mullins (1918-1946) and his wife Mae Elizabeth. A native of Moore County, North Carolina, Mullins soon showed a talent for music and eventually learned to play guitar. He married Emalee Proctor in 1954, with whom he had two children, Tony and Tonya. Mullins and his wife remained together for the rest of their lives.

By 1957, Mullins had assembled a bunch of guys to form a band called "The Night Raiders." At that time, Mullins still held a regular day job; music was only a sideline for him. They played mostly country music around High Point, North Carolina. The band also had a local radio show and Mullins was doing a regular DJ show on WMYN in Eden, North Carolina. In 1957, the band's original drummer fell out and was replaced by Robert "Bob" Matthews, who had just finished high school. Matthews had previously played in various bands, including a rock'n'roll group called "Rhythm Rockers." Also part of that group was 17 year old David Michael "Mickey" Hawks, who played piano and sang. At the suggestion of Matthews, Hawks joined the Night Raiders in September that year, although Mullins was not too enthusiatic to have a piano in his country band. Hawks was particularly influenced by Little Richard and Jerry Lee Lewis, which you can certainly hear in his vocal style and piano playing.

The band now had a singer who was adept at singing the rock'n'roll hits of Fats Domino, Little Richard, Ray Charles, and others. Mullins, who played guitar at the time, usually sang the country songs. Being now a rock'n'roll combo, Mullins bought himself a saxophone and learned to play it. At that time, the Night Raiders consisted of Mullins on vocals, guitar and sax, Mickey Hawks on vocals and piano, Bill Ballard on lead guitar, John Owens on bass, and Bob Matthews on drums.

The Night Raiders played a lot of the local dancehalls in the High Point area and in 1958, Mullins suggested to cut a record. He asked Hawks to write a song for recording. Hawks came up with a rock'n'roll tune called "Bip Bop Boom." The band found a tiny studio called "Robbins' Recording Studio" in Greensborough, North Carolina, and a session was set up. The studio was run by Eddie Robbins, who also had the small Robins Red label. Probably in the spring of 1958, Mullins and the Night Raiders recorded two ouststanding rockers, "Bip Bop Boom" and "Rock and Roll Rhythm," the latter composed by Hawks and Matthews. On both performances, Hawks took over the vocals with Ballard and Mullins  throwing in top notch solos on guitar and sax.

Robbins released both recordings on his label with only 500 copies being pressed on red vinyl, which was quite unusual at the time. The record was sold at gigs the Night Raiders played. Shortly afterwards, Mullins managed to release the songs again on Ted Prillaman's Mart label in Martinsville, Virginia (Mart #45-113), which is located about 56 miles north of High Point. Prillaman was also a local radio DJ and a friend of Mullins'.

The Night Raiders were playing a venue in Sanford, North Carolina, one night, when they were discovered by a man called Ian (or Ed) Thomas from Chicago. Thomas was friends with Mike Oury, who owned the Profile record label in Chicago. Thomas recommended the band to Oury and sent him the record the band had recorded. Oury was impressed enough to come down to High Point and sign the Night Raiders to a three year recording contract. He re-released "Bip Bop Boom" / "Rock and Roll Rhythm" on his label later in 1958 (Profile #4002). The record caught on in the Chicago area and sold over 50.000 copies. It was also released through Trutone Records in South Africa and reportedly hit the #1 spot there in Johannesburg.

The Night Raiders embarked on a tour through the midwest and had two more records released on Profile. The first of those was the great instrumental "Cottonpickin'," showcasing Bill Ballard's skills on the guitar as well as "Hidi Hidi Hidi" with Hawks on vocals (Profile #4007). It came out about one year after the original release of "Bip Bop Boom." Their next and last one on Profile was the pounding "Screamin' Mimi Jeanie" b/w "I'm Lost" (Profile #4010) in 1960. Both singles were produced in Chicago at a professional recording studio but couldn't repeat the success of the band's debut release.

In 1961, Mullins and the Night Raiders recorded again for bluegrass musician Jim Eanes' Lance label out of Richmond, Virginia. The tracks were "Gonna Dance Tonight, Part 1," a vocal number, and "Gonna Dance Tonight, Part 2," an instrumental version (Lance #005). Around the same time, the Hunch label in New York City re-released "Cottonpickin' / "Hidi Hidi Hidi." Afterwards, Bob Matthews left the group and was replaced by Leroy Butler on drums. The Night Raiders kept on appearing in North Carolina during the 1960s with different members, apart from Mullins and Hawks. In 1968, the band did one last recording for Piedmont Records in Danville, Virginia (Piedmont #45-2044). One side featured "Ain't Gonna Cry" by Hawks and the other side had "Baby, I Got You," a duet with Hawks and Gwynn Kellum. Kellum appeared with the Night Raiders occasionally during this time.

The Night Raiders eventually broke up. Mickey Hawks kept on performing and played regular gigs in Europe during the 1980s. He died way too early in 1989. Moon Mullins stayed in the entertainment business. He owned a nightclub called "Moon's Danceland" in Madison, North Carolina, during the 1960s, where the Night Raiders would serve as the house band. He later also co-owned WREV radio in Reidsville, North Carolina. Mullins died June 30, 2014, at the age of 76. He was buried at the Woodland Cemetery in Madison.