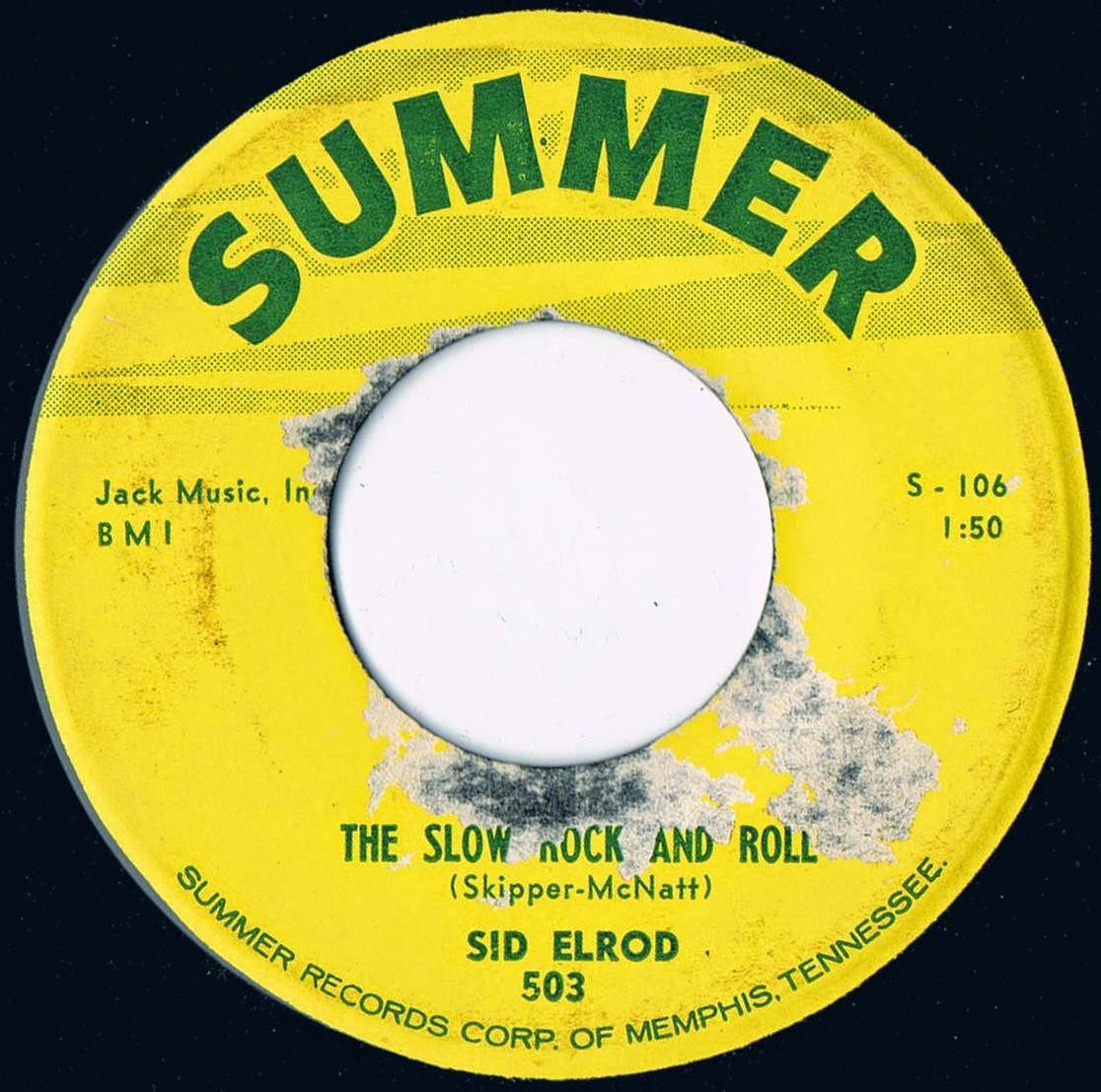 I'm pretty sure "Sid Elrod" was a pseudonym for musician Macy (Skip) Skipper. This 45 came to me a couple of weeks ago and it is the only copy I've seen so far. The label on one side is not in best shape but it plays great, nevertheless. This is a follow-up on my Summer Records post last week.

Macy "Skip" Skipper was born on September 2, 1920, in St. Louis, Missouri. He started his musical career as a bass player for the Swift Jewel Cowboys. In 1943, Skipper and his wife Marie moved to Oak Ridge, Tennessee, and they began to work as a duo around Memphis in 1951. Sometimes in the 1950s, he founded his own band and appeared at different venues in Memphis with this outfit.

In 1956, Skipper and his band cut three tracks for Sun Records, including an earlier version of "The Slow Rock and Roll." The band consisted of Skipper on vocals and bass, Sun studio musician Brad Suggs on lead guitar, Nelson Grilli on sax, Melton McNatt on piano, and Slick Grissom on drums. Since Sam Phillips showed no interest to release anything from that session, Skipper moved on and recorded "Quick Sand Love" b/w "Who Put the Squeeze on Eloise?" for M.A. Lightman's Light record label (exact date unknown), followed by a second single under that same brand.

After that, Skipper probably recorded the single featured today. Summer Records was founded by Jack Clement early in 1959, who had just parted ways with Sun before. How Skipper ended up on Summer as "Sid Elrod" remains a mystery, though it is likely that Skipper and Clement knew each other before. The two instrumentals "Slap Happy Bass" b/w "The Slow Rock and Roll" were possibly recorded with his own band. The Sun files list Skipper as the composer of "Slow Rock and Roll," the Summer label lists also Melton McNatt as composer.

In 1960, Skipper followed up with another single on Stax ("Night Rock" / "Goofin' Off", Stax #117). Skipper kept on performing locally while holding down his regular job until his death on April 17, 2001.

Thanks for the info Mr Mellow

RCS is relying on BMI data and BMI says 1957 for "Love Is My Business" because it was copyrighted in 1957. Quinton Claunch and Bill Cantrell wrote that song back then while they were working with C.W. Matthews. Dave Gardner recorded a version of "Love Is My Business" for Matthews' OJ label in 1957 and Bobby Chandler another Claunch-Cantrell song called "Me and My Imagination."

"Motorcycle Michael" was copyrighted on May 1, 1959, that's when Jack Clement founded his Jack Music Inc. publishing firm. It makes sense that Summer came not into existince until 1959, since Clement was working for Sun from 1956 up to early 1959 when he was fired by Sam Phillips. I guess Phillips wouldn't have tolerated another label by one of his producers.

See also 706unionavenue.nl: "[...] Another version of ''Love Is My Business'' became Gleaves' first single on Jack Clements's post-Sun indie label, Summer Records, and sounds as if it was recorded with another group. It's B-side ''Easy Goin' Guy'', was a Clement song copyrighted in February 1959. [...]"

Thanks for the explanation, better retag my dates. Dean

Great record! Sure would love to hear Slap Happy Bass.