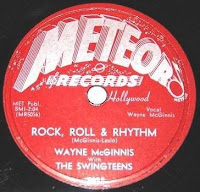 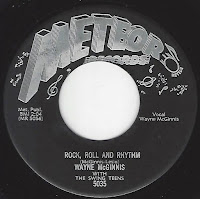 Wayne McGinnis - Rock, Roll and Rhythm (Meteor 5035), 1956
Probably one of the most underrated personalities in the Memphis music scene, Wayne McGinnis was both an artist and a business man, recording some of the finest Meteor rockabilly sides as well as leading various labels throughout the 1960s. Another fascinating fact is that he later owned Elvis Presley's first guitar.

Robert Wayne McGinnis was born on January 6, 1932, in Mississippi County, in the Northeast of Arkansas just across the Tennessee state border. Contrary to many other rockabilly singers of his era, McGinnis originated not from a poor sharecropper family but from a relatively wealthy background. His parents, Harry and Audrey Cleo McGinnis, also had six more children: Harold L., Dale, Harry Boyd, Margie, Dorothy, and Ramona June. During high school, McGinnis learned to fly a plane, inspired by a relative of his and it would become a passion he enjoyed all his life. Instead of driving a car, he would cover the distance of 40 miles between home and Arkansas State College with his own plane.

Young McGinnis moved to Memphis, Tennessee, in 1953 after graduating from high school. There, he began appearing with guitarist Billy Joe Miller and played a mixture between jazz and country music. Shortly afterwards, McGinnis joined Slim Wallace's Dixie Ramblers, a country band that included at one time or another also Billy Lee Riley and Jack Clement. Wallace just had founded his own label Fernwood Records and built up a small studio in his garage. The label was named after its location, Fernwood Drive in Memphis. McGinnis recorded a couple of demo cuts for Wallace but more information on these early cuts escape me, unfortunately. Cees Klop issued two demo recordings of McGinnis' "Rock, Roll and Rhythm" and "Lonesome Rhythm Blues", both of which he would later record for Meteor Records. If these were the tapes made at Fernwood is unclear at this moment. Klop, who issued them on his "41 Years Collector Records" CD in 2008, gave no particular information other than "[...] these are much earlier 'rough' demos [...]. These primitively recorded demos give us a unique piece of recorded history that luckily is preserved for posterity."

At the same time, Elvis Presley went nationally and had left a massive impact on Memphis and its whole music scene. Everyone was speaking of a new sound soon to be called "rockabilly," a style that captured many young southeners' hearts. McGinnis was no exception, especially because he lived in Presley's neighborhood. 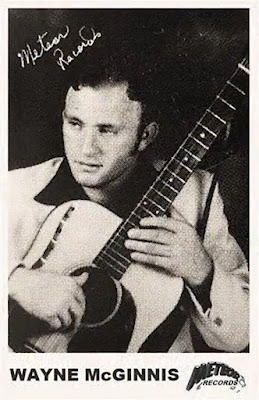 First, McGinnis tried his luck at Sam Phillips' famed Sun Records that also had Presley, Johnny Cash, Carl Perkins, Roy Orbison and countless other rockers under contract. Since Phillips wasn't impressed enough with the results, McGinnis turned to Meteor Records, another independent label on Chelsea Avenue, and owner Lester Bihari gave him the chance to cut his first record. On April 12, 1956, he went into Meteor Studio to wax "Rock, Roll and Rhythm" and "Lonesome Rhythm Blues," which were released in the summer of 1956 on Meteor #5035. On this session, he was backed by Billy Joe Miller on lead guitar and Curley Wilson on bass with McGinnis on vocals and rhythm guitar.
Bihari sent out some of his rockabilly artists, including McGinnis, on tour through West Tennessee, Northeast Arkansas, and Southeast Missouri, but McGinnis' disc never achieved much success. Although more records were granted in his contract with Meteor, McGinnis never got the chance to record a follow-up and in the end, it remained his sole release on vinyl.

In 1957, he went into partnership with Harold Curry, Herman Hall, and Dick McPhearson to develop his hobby into a business and founded his own crop dusting firm, "McGinnis Crop Dusting Service", in his home of Mississippi County, Arkansas. At that time, he was only 25 years old.

Though, music was still on his mind and McGinnis got involved with promotion work in the late 1950s. In 1961, he founded his own Santo label that enjoyed moderate success and a year later, added the Sanwayne label to his business operations. McGinnis also ran his own recording studio for some time in Memphis. The Santo label had a minor chart hit in the spring of 1962 with Ace Cannon's "Sugar Blues" b/w "38 Special" (Santo #503), which peaked at #92 on Billboard's Hot 100. Apart from that, McGinnis released discs by such infamous Memphis figures as Harold Dorman, Thomas Wayne, Anita Wood, Sylvia Mobley, Bobby Lee Trammell, among others.

In 1968, when Slim Wallace finally gave up his interest in Fernwood Records altogether, McGinnis jumped at the chance and bought the remaining master tapes that had been left over. A good deal of Fernwood's tapes and equipment had been destroyed by a flood prior to McGinnis' purchase. McGinnis operated the Santo label until the early 1970s, before closing down its activities and in turn eventually selling the label to British music enthusiast Dave Travis.

Although living in Memphis during the 1950s, he later relocated to Mississippi County and spent his last years in Jonesboro. McGinnis had married his wife Ramona in 1954 and had three children with her.