At the Detour Inn

At the Detour Inn: A song and its composer
Paul Westmoreland

During the economic depression of the 1930s, many poor workers from the rural states of the Great Plains, especially from Oklahoma, moved away from their dusty home in order to seek their fortune on the west coast. They found work on the farms picking fruits in California. Although they brought not many things with them to the west, one thing for was for sure: their southern music came with them.

One of those young men who left Oklahoma for California was Paul Westmoreland, born on September 19, 1916, in Oklahoma. During the time of the “Dust Bowl,” he moved to California and began working on the fruit fields and in armories during the Second World War. Westmoreland went back to Oklahoma several times but always found himself in a hopeless situation there, so he finally settled down in California. Already back then, he played music in order to earn a little extra money. After the war, he settled down in Sacramento, where he started his professional career as a musician and composer. 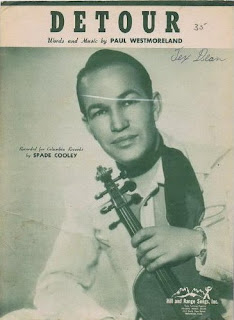 In 1946, he had an own radio spot on a local station and was soon known as “Okie Paul.” “Okie” was a common insulting name for the many migrants from Oklahoma in those days but Westmoreland bore this nickname with pride. After every advertisement, he yelled out in the microphone “Tell ‘em, Okie Paul sends ya, heah!” That same year, Westmoreland composed his biggest success as a songwriter. “Detour (There’s a Muddy Road Ahead)” became one of the most successful country songs of the year and was recorded by countless artists. Elton Britt (RCA Victor) and Wesley Tuttle (Capitol) brought their version into the top 10 charts but the most popular version to this day was recorded by Spade Cooley and his Western Swing Orchestra. His rendition on OKeh sold even better than Britt’s and Tuttle’s version and it remained one of Cooley’s biggest hits. Patti Page covered it in 1951 and her version spent 16 weeks on the charts, peaking at #5.

Possibly from the royalty payments, Westmoreland set up his own record label, San Antonio Records. “Devoted exclusively to the finest American Folk Music” was printed on the labels of San Antonio records and in fact, it appears they were excellent pieces in the field of western swing. Frankie Marvin, who had been a solid entertainer and experienced recording artist from the 1920s onwards, cut a couple of songs for San Antonio as well as Larry Bryant. Westmoreland also released his own recorded work on San Antonio. Most of them were written by him and show similarities to “Detour.” “Headin’ Down the Wrong Highway,” penned by Ted Daffan, and “From Now On” had the same topic as Westmoreland’s hit composition, while “Oklahoma Bound” was clearly a biographical song.

By 1954, Westmoreland was recording for 4 Star out of Pasadena and laid down a solid pre-Rockabilly performance with his composition “Hot Rod Rag.” Recorded approximately in late 1953 or early 1954, it featured some hot licks by both lead and steel guitar. A poster from the 1950s announcing a “Rock’N’Roll Show starring Paul Westmoreland plus Max Houston’s Rocking Kings” suggests that he stuck with that style, at least for some time. He eventually would also record for K-Ark and Pride.

Westmoreland remained a fixture on the Sacramento musical scene but had no notable success during the second half of the 20th century. He led his own bar called the “Detour Inn,” located on Raley Boulevard in North Sacramento, where he would not only serve the drinks but also perform on stage. He and his family lived in a house right beside the bar. A regular guest at the bar tells us:


He was married to a very interesting lady by the name of Ola Louise who envisioned herself as the next Loretta Lynn. Paul idolized her and a rule was that every band that played at the Detour would let Ola sing a set with them.
I spent a lot of time in the Detour when I was stationed at McClellan AFB ... exactly one mile out the back gate to the bar. All of Paul's bartenders and bouncers at the time were from my squadron ... but don't let Ola catch you comping a drink to a friend!
Big thing you had to watch out for was when a biker would start a fight ... don't worry about the bikers ...Watch out for Ola Louise! She'd be the first one to hoist a bar stool and come out swinging ... quite a sight!

Eventually, the bar was renamed "Country Comfort" and closed its doors finally in 1992. The original building is still standing. Westmoreland's son Dave also became a musician. Paul Westmoreland died on June 21, 2005, in California.


Thanks to Twobadeyes
Eingestellt von Mellow on 4/03/2013

Slight correction, Okie's bar, The Detour Inn, was located on Raley Blvd. in north Sacramento. He was married to a very interesting lady by the name of Ola Louise who envisioned herself as the next Loretta Lynn. Paul idolized her and a rule was that every band that played at the Detour would let Ola sing a set with them.

I spent a lot of time in the Detour when I was stationed at McClellan AFB ... exactly one mile out the back gate to the bar. All of Paul's bartenders and bouncers at the time were from my squadron ... but don't let Ola catch you comping a drink to a friend!

Big thing you had to watch out for was when a biker would start a fight ... don't worry about the bikers ...WATCH OUT FOR OLA LOUISE! She'd be the first one to hoist a bar stool and come out swinging ... quite a sight!

If she and Paul liked you, you couldn't have two better friends. (and they like just about everyone)

Funny thing though, all the time I spent in the place ... Paul never did sing once.

Yes, I know that place. About the bikers, they are frienly. You can go.

Thanks for the write up on Detour Inn. I Googled KRAK radio a few months ago and found an announcement that Mike Sides, a DJ for KRAK, had passed away. This page also was listed and brought back memories of listening to KRAK. I remember KRAK ran commercial for Detour Inn ending with the jingle:

This played during summers in the late 1960s.

I spent 3 or 4 summers during my early teens in Goldfield, western Nevada to help my great uncle. In his later years he worked with a cattle company. He and I would go out for days maintaining troughs and springs on the Nellis range. We would listen to KRAK Sacramento during the evenings on our Jeep radio after the sun set. Thanks again for the nice post. Kevin

3Yes, twobadeyes, I was also from 1155 TOS and bartended at DI in the sixties-ret from TOS 1975-all gone now-Beau Ferris, Gene Lawless,both gone now, me and others-been looking for more of Ola's songs on youtube, like Sasquatch. Great times, great customers-did get scratched up cat fight, Scottish Mary and another, fun, fun. Bob Long

I too, worked as a waitress and then a bartender at Detour Inn for many years, and my father Jim managed the place for several years in the 70's. If you went to Detour In then you would not have forgot my dad, and his Clark Gable mustache - lol. Anyone remember Bobby Bass, Ace, Jim, Ron and many other had their spots at the Bar. Cecil and Janet and the regulars every Saturday night. I loved the shuffle board table, you hardly ever see them anymore. It is so true about Ola Louise jumping down off of the stage when singing and break up and fight and then get right back up there and sing. One of the songs that I loved best that she use to sing was "Marie LaVeau" boy could she belt that song out as with all of her songs. Okie Paul did sing a few times but not many. As for the bikers they were great - help me move out of my house when I got a divorce - lol. I do believe that Detour Inn used to be called the "Corral" and from what I gathered from old timers back then - lol, the dance floor was outside and fenced in. After it was sold and became Country Comfort, it was never the same. Dang I miss that place. thanks Okie Paul, Ola Louise and Detour In for being part of my growing up. Robin

OK, you sign as Anonymous ... but are you really the waitress we called Boots?

KRAK Radio eleven four oh.
It was called the Bell Avenue Corral.Then the Detour In & then Country Comfort. Paul was always too busy running a big busy Honky Tonk. He was nice, friendly. He was surprised that I knew all the lyrics to Detour and that I knew he was a songwriter. Most customers didn't. Lots of big names came thru Ernest Tubb Kitty Wells Johnny Paycheck. A lot of big names lived in Sacramento Bob Wills had Wills Point and the Arregon Ballroom out on Auburn Blvd. Tiny Moore had a music store on El Camino. I took fiddle lessons from him. I met Bill Monroe there one day. Lynn Anderson was the receptionist at KRAK.
Some one mentioned Cecil and Janet Bennett were Saturday night regulars they were my next door neighbors. The American Legion had a steel guitar jam every Sunday lots of great musicians came thru there.
But the Detour In was the biggest club with a great wooden dance floor for a long time. It was always packed on the weekends & not too rowdy. Most of the regulars are gone but there's still a few of us out here.

I saw some of the names mentioned in the 1155th from McClellan. My dad was Timothy Burns and went to the Detour quite often. I think he also bartended there part-time. My parents were friends with the Ferris' and a guy named Dave Riddle. I spent some time in that place even though i was just a kid. I remember Paul and Ola lived in mobile behind the Detour in the mid 60's. That's when i was there.

Beau, Are you still around? I can’t believe I ran across your name in the Detour Inn blog. I remember you taking me over to the Detour Inn and meeting the owners. It was a great event for me because I loved the song. I was a flyer In the 1155th and flew with Bob Lockwood in the 54. I didn’t hang much at the Inn since I was flying most of the time and eventually deployed to Argentina. If you have a photo of you around the time you were in the1155th could you zip it to me at 301-919-6503? Thanks. John Westberg