The Blake record label out of Memphis, Tennessee, has never been spotlighted in its full glory. Though the label has an extensive discography that could take years to research in detail, the label's history has been largely obscure since its demise sometimes in the 1970s.

Blake was founded by John Cook, a country and gospel musician originally from Arkansas. Similar to Arlen and Jackie Vaden from Trumann, Arkansas, Cook and his wife Margie would sing harmony gospel duets on radio and also made the occassional record during their career. John was born and raised in Cord, Arkansas, a small town about 20 miles east of Batesville and 25 miles north of Newport. He came from a musical family and started playing guitar and singing at the age of ten. He met his future wife Margie at a camp meeting and married her three months later. Margie hailed from Melbourne, Arkansas, and was also born into a musical inclined family. Together, they began to sing gospel and country duets with John on guitar as well as vocals and Margie joining him. 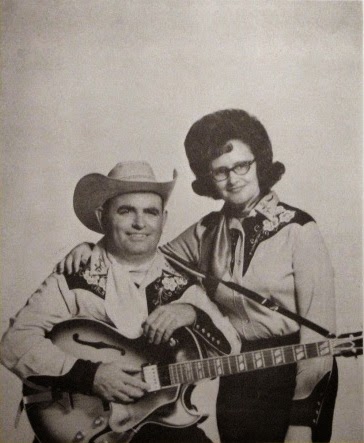 The Cooks began their professional career in 1947 on the radio. They soon appeared on different stations, including border town stations like XEG (Fort Worth, Texas), XERF (Del Rio, Texas), XERB (San Diego, California) and also did a couple of TV appearances. Probably their first recording was released in either late 1958 or early 1959 on the Volunteer label. A Starday custom press, it featured two of the couple's originals, "The Love I Have for You" / "Do I Have to Stay Alone" (Volunteer #737), credited to "John and Margie Cook and the White River Boys." The name of the band drew probably from the White River in Arkansas, which is located south of Cord and west of Melbourne. The label already showed a Memphis adress (1745 Lamar Avenue), so the Cooks likely lived in Memphis at that time.

Another record of John and Margie appeared in 1965 on the Dot label, coupling "River of Love" b/w "I'll Take Down Your Shingle." It was around that time that John founded Blake Records in Memphis. The initial release on the label had Hershel Jeanes, accompanied by Dotye Dee and her Rhythmaires, with "Let Me Start with You" b/w "Guess Tonight I'll Make the Bars Downtown" (Blake #2-200). Interestingly, this very first release had a completely different, simpler, label design than waht would follow. Jeanes had a second single out with Dee on Zone as well as further releases on Blake. Dee also recorded for Yesteryear Records in her own right. Billboard reported in January 1965, that Jeanes and Dee took part in a benefit show that was held at the Linden Circle Theater (then known as the "Mid-South Opry House"). Other artists included Eddie Bond, Roland Eaton, the Davis Brothers among others. Jim Wells acted as the show's emcee.

The next known release on Blake was by Roland Eaton, "Married in Church" b/w "My Baby Walks All Over Me" (Blake #2-202). Eaton was a country singer from Arkanas. Born in 1935 in Ravenden, Northeast Arkansas, he was the emcee of the Mid-South Jamboree in the 1960s, appeared with Gene Williams' Country Junction show in 1968 and also had his own show on KAIT in the late 1960s. He would go on to record for Capitol 1968-1971 but later quit the music business.


However, a release date for neither Jeanes' nor Eaton's single is not known. It is Sue Simpson's "The Great Tornado" (Blake #2-216) which can be dated as 1966; all releases prior to her single have to be issued around 1965/1966. Due to missing reliable sources such as Billboard reviews or matrix numbers, it is difficult to date early releases on Blake. By 1970, John Cook was using Precision's pressing plant in Nashville, which makes it easier to estimate the release dates because of the plant's matrix code.

John and Margie also released their own recordings on Blake. The first was "Till You Come Home" / "You Were Not Around" on Blake #2-211. During the next years, they would cut another five records plus an entire album. Early Blake labels show 498 Lundee Street in Memphis as adress but soon after, the label would move to 3291 Park Avenue (as seen on Blake #2-215). Both streets are located in residential zones, thus it is likely John ran the label from their home. It is also likely he didn't operate his own studio but rented other facilities in Memphis. In any event, the business seems to have been more a custom label than a professional record business. Nevertheless, Cook had his own publishing firm "John Cook Music" (whereby most of the recorded material was published) as well as another label, Marble Hill Records, which came into existence in 1968. According to Colin Escott, Marble Hill was co-owned by Memphis singer Howard Chandler, who also had the debut release on the label.

The label's output was similar to what John and Margie were singing: gospel, bluegrass, country, and some upbeat country music thrown in from time to time. There were at least 123 45rpm records on Blake and the Cook's album. A short Billboard mention in its November 18, 1972, issue, describes Blake as "one of the mainstays in country in Memphis." The last known single is "Country Waltz" b/w "Golden Slippers" by Dusty Ray Sawyer on Blake 2-232 in 1977.

John and Margie, however, had another record out in the 1970s on the Sardis label, "I'll Take Down Your Shingle" / "River of Love" (Sardis #5 5716). The picture sleeve of the record stated it was recorded at Arthur Smith's studio in Charlotte, North Carolina, so this was possibly a re-recording of their earlier Dot single.

John Cook died in 1983 and was buried at Memorial Hill Gardens in Memphis. By the time of his passing, the Cooks lived in West Memphis, Arkansas. 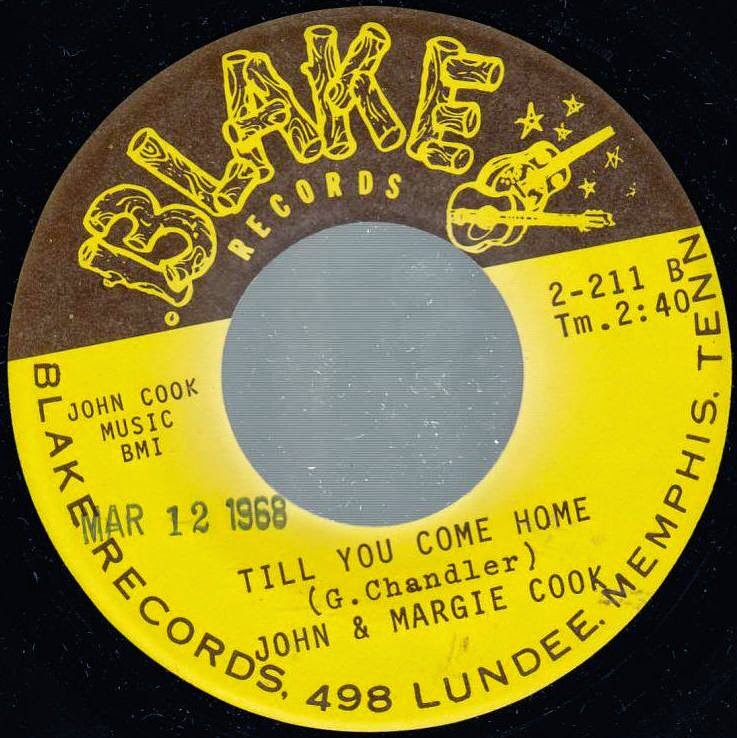 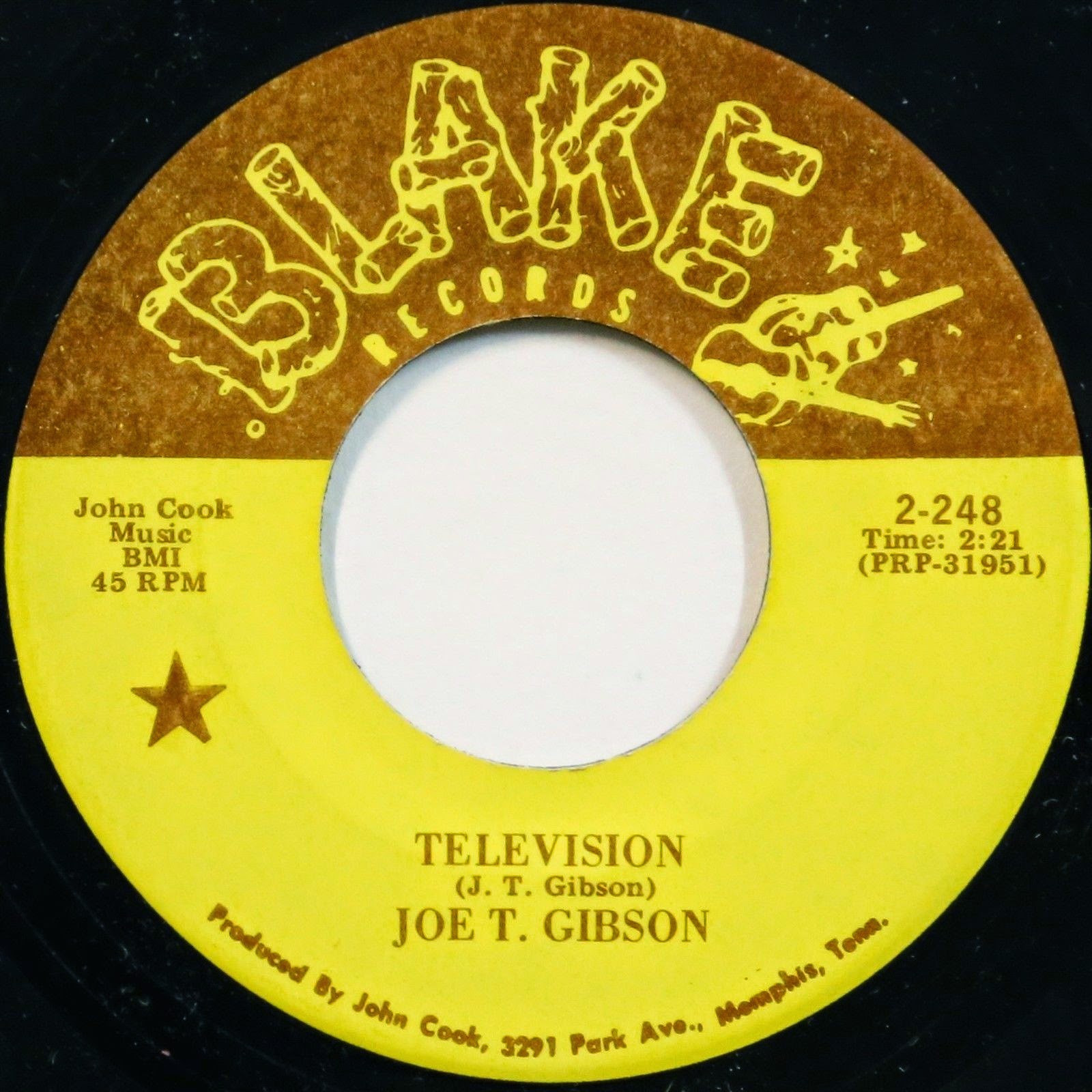 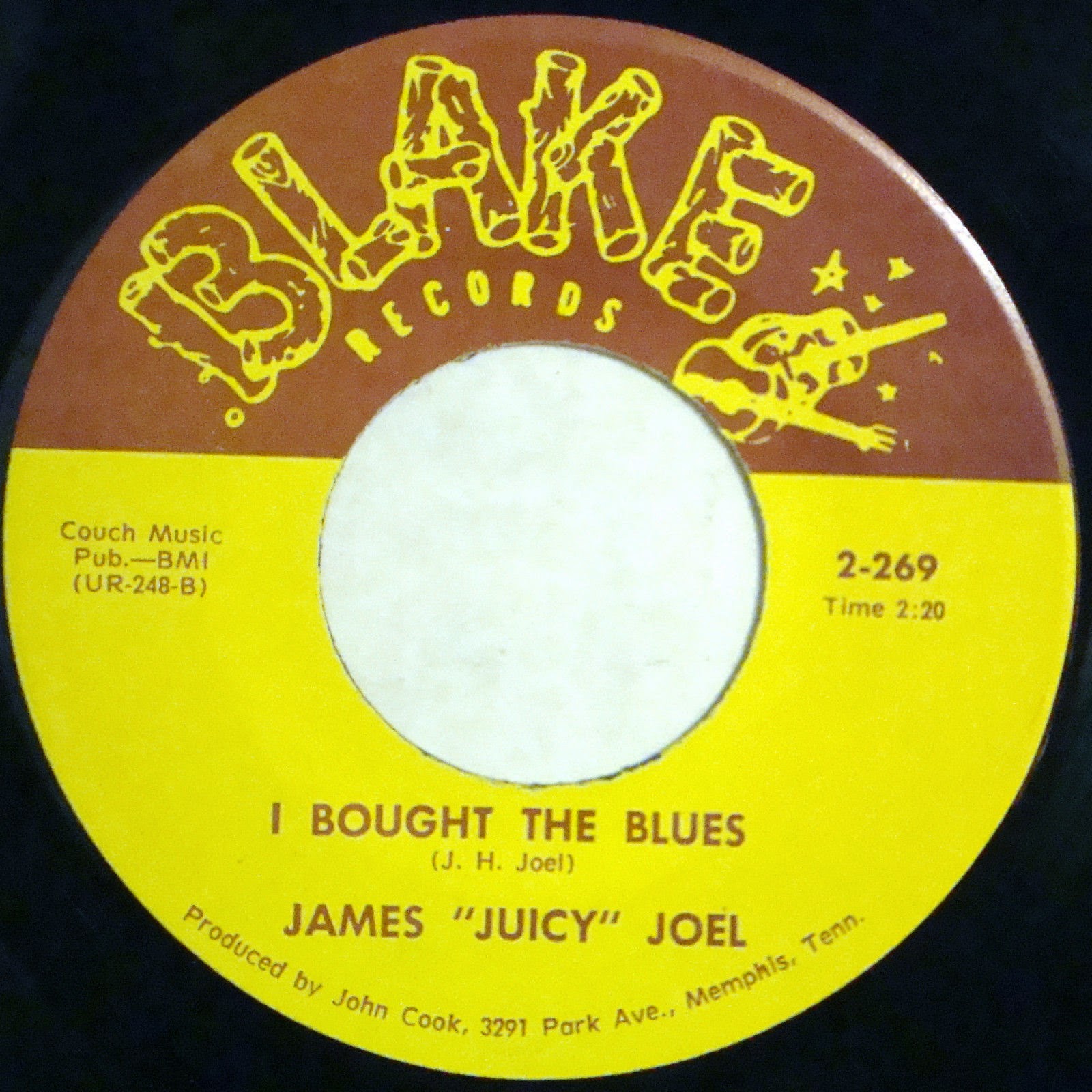 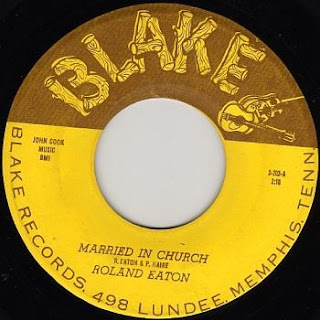 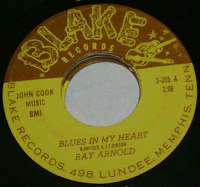 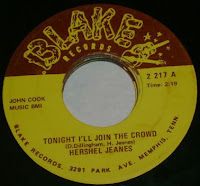 Got one more for you:

Thank you guys for your help!

I HAVE A BLAKE 2-263. 'SHE'S AN ANGEL TO ME' BY SAM & KAY NEAL AND 'I'M DISOWNED'. THOUGHT YOU MIGHT WANT TO ADD THE TITLE TO YOUR BLAKE DISCOGRAPHY.
JAXGHILL@MSN.COM.

B side
Joyce Murry
I'll keep on loving you

Thanks Mellow, I was chasing the trail of "Hellbound Train" by Marie Roberson on Marble Hill (it's Halloween seems like a nice diversion) and it led here. There seems to be a lot of Howard Chandler on Marble Hill for sale on E Bay so I can see him being a part owner in the label. Good info, like the pictures

Thanks for the kind words. And yes, there are a lot of Howard Chandler releases on the label. I am also working on a Marble Hill discography!

I'm going to place Blake Records #2-297 on eBay this evening. Thanks, Wayne

Flipside of 207 by Don Osment is I'll Take You Back Again.

As John & Margie's granddaughter, I can safely say, your little blog has several inaccuracies. Next time, you need to do a little better research!

Hello there, I had a hard time finding out anything on your grandparents as there isn't much documented, I think. I did my best to cover their story correct but historical sources may contain inaccurate info. If you'd like, you can point out the wrong things to me. You can access my e-mail adress on my profile page.