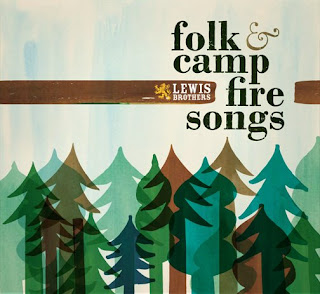 The three Lewis brothers from Ohio coupled with drummer Dennis Foreman recently released their second album. More a tribute to their musicial roots than containing new or original song material, the band puts old songs in a new style much of their own. Jeff Lewis previously performed with the Bluegrass group Big Scioto, Richard played with a pop band and Foreman collected his musical experiences with Jakob Freely. Only Russell Lewis wasn't a member of a band yet, the Lewis Brothers is his first act he appears with.

Although three of the four band members are real brothers, they come from very different musicial backgrounds and as varied as their personal influences are, so is the track list of their second album "Folk & Camp Fire Songs." Many recordings are traditional folk tunes and the musical style on all tracks is something between Country, Bluegrass, and Folk, but I won't label them as any of them. You can hear Bluegrass guitar picking, old Folk banjo strumming, beautiful harmony singing and the drums add a very special effect.

The album kicks of with the light-minded "It's a Lie," which immediatly spreads a happy atmosphere, presented with a sense of humor. "Old Joe Clark" is another hillbilly tune with a nice mandolin picking, "Froggy Went a-Courtin'" is the band's rendition of the well-known folk song that has so many other names and lyrical variations. "Poison Ivy" certainly takes the band into the popular music direction and they do a nice job on this Coasters' hit from 1959.