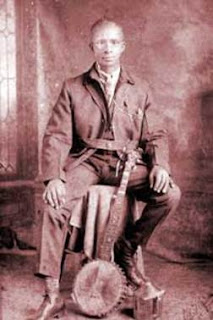 I am expending the "day" posts by blues musicians in order to have artists I can write about - the more famous old-time musicians have all been the subject of this blog.
Gus Cannon was born in 1883 in Red Banks, Mississippi, as the son of slaves. As a boy, he worked on the cottonfields and came in touch with blues music. He learned to play the banjo around that time. Cannon was part-time active as a musician from 1900 to 1927, playing with several bands, medicine shows, and performing on the famed Beale Street in Memphis. But it was not until 1927 that his professional career as a recording artist started. He made his first solo sides for Paramount under the name of "Banjo Joe" and one year later, he began to record with Noah Lewis and Ashley Thompson as "Cannon's Jug Stompers" for Victor. These songs became his most famous recordings and were re-discovered during the folk revival. But success eluded him soon and by 1930, his recording career had ended. He kept on performing and lived in Memphis, where he got to know a young Johnny Cash in 1954. Cash used to sit on Cannon's front porch after work and listened to Cannon's banjo playing. During the 1960s, Cannon became famous with the young folk audience and recorded an album. The Rooftop Singers covered his "Walk Right In" and had a #1 hit. Cannon died in 1979.

Email ThisBlogThis!Share to TwitterShare to FacebookShare to Pinterest
Labels: days