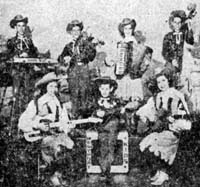 Since the Rockabilly Ranch posted a whole bunch of Westport recordings, I researched a little the history of Kansas City Country and Rock'n'Roll history. KC had never the reputation as a big recording center or a lively music scene, but in the late 1940s, the 1950s and early 1960s, there were a lot of Country and Rock'n'Roll artists in the city. I start my journey through the 'Kansas City Country Rockers' at Westport Records:

Westport Records was formed in 1955 by Dave Ruf and his brothers as an outlet to record both their son and daughter, billed as the Westport Kids (the whole Ruf family is pictured right). The first single released by the new label was Westport 132 by the Westport Kids called "Right or Wrong / Hold My My Darling". I don't know why the company's catalog began at 125 - a mystery that probably never gets solved. However, Westport started out as a country label, recording also such artists as Mild Dickey and Jimmy Dallas, who was a local country star in Kansas City. Their recording studio cllaed Westport Enterprises, Inc was based in Westwood, Missouri, a town near Kansas City, where the Rufs also lived. The studio was active as early as the late 1940s and I suppose many of the later Westport recodings were cut there.
Westport's probably most famous records by Texan rockabilly Alvis

Wayne came first out in September 1956. Alvis was one of the few rockabillies on the label, although Westport was also one of the first labels in Kansas City that jumped onto the 'South Rockin' Railway' and recorded the 'big beat'. But Westport's most sucessful artist never visited Kansas City, he recorded all his sessions in Corpus Christi, Texas, or Houston, Texas. The recording contract was set up by Tony Wayne, who was Alvis Wayne's mentor and background musician along with the Rhythm Wranglers. Alvis Wayne's first record on Westport was "Swing Bop Boogie / Sleep Rock-a-Roll Rock-a-Baby", which got only little airplay in Texas and sold about 2000 copies. Wayne's next record, also recorded in a little studio on Corpus Christi, was Westport's and also Wayne's biggest record. "Don't Mean Maybe Baby" was issued in 1957 and got good reviews by Cashbox and charted in South Texas at No.1, leaving also Elvis Presley behind. But the Top 100 were still far far away.
Wayne's last record on Westport came out in September 1958 on Westport 140, the slightly pop oriented "Lay Your Head On My Shoulder / You're the One". During the years of 1956, 1957 and 1958, Westport had continued to release singles by Milt Dickey, one record by Alvis Wayne's back up band Tony Wayne & the Rhythm Wranglers, the Westport Sweethearts (maybe also children of the owners?), Bob Dougherty and Jimmy Dallas. Dallas had a release on Westport 136 that featured a song called "Eeny Meeny Miny Mo", a title that often appeared as a title for rockabilly songs (also used by Hoyt Johnson and Bob & Lucille, both different recordings). I have no info on Dallas' Westport records, but it sure would be nice to find out if this particular one was a rockabilly styled song, it's not listed in RCS.
However, Westport had two other Rock'n'Roll singles after Wayne's departure from Westport. In early 1959, the label released Lee Finn's Country Rock & Roll outing "High Class Feelin' / Pour Me a Glass of Wine", while a single by the duo Ronnie & Marlene came out in the fall of '59 ("I Wanna Love You / Marlene", Westport 144). This was Westport's last rockabilly record.
The company's last issue came out on Westport 145 by Gene Chapman, probably in 1962. After that, the label was closed down by the Ruf brothers. Westport never gained a national hit, just releasing singles for the local market. The total output were only about 22 singles in seven years. Concerning the few releases the label made, it is an interesting fact to know that Westport was one of the more profilic record labels in Kansas City, showing how small the local scene was.
You can find a bunch of Westport recordings at the Rockabilly Ranch.
Eingestellt von Mellow on 9/01/2009

Jimmy Dallas' song is not a Rockabilly one. watch here:
http://youtu.be/TSwHv4lHIzw