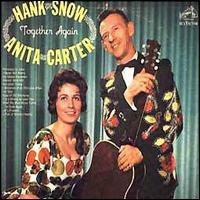 Here's a set of Anita Carter songs. Anita was always my favorite among the Carters, apart from Mother Maybelle. I think she had a pretty voice that would have also fit much better to Johnny Cash, but you know, John preferred June. Anita was one of the Carter Sisters from the Carter Family. She sang and played bass fiddle for many years with her sisters Helen and June and her mother Maybelle Carter. Although Anita had a solo career (and recorded the very first version of "Ring of Fire"), she was more a favored duet partner. With Hank Snow, she had some success in the 1950s and went also into the C&W top ten with Waylong Jennings ("I Got You"). "Rings of Gold", the flip of the Jennings-duet-hit, was also recorded by Don Gibson & Dottie West.