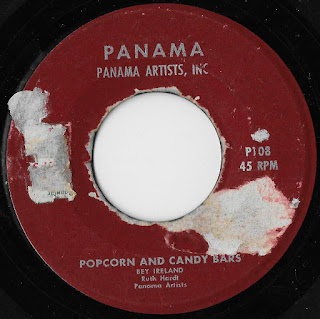 I was interested in this record mainly because of the song titles and their songwriter instead of the actual performance. The reason why "Popcorn and Candy Bars" and "My Bimini Baby" looked so interesting for me, is the fact that Miami rockabilly artist Kent Westberry and his band, the Chaperones, also cut a version on both titles. The songs were penned by amateur songwriter Ruth Hardt, the wife of a local Miami doctor. She approached Harold Doane, who owned the American Recording and Transcription Service and its record labels Art, Perfect, and AFS. Doane in turn called one of his artists, Kent Westberry, who had cut a record on Art before. Backed by studio musicians including guitarist C.W. Keith, Westberry recorded the aforementioned two songs plus another of Hardt's compositions, "Turkish Doghouse Rock." Doane surprisingly released "Turkish Doghouse Rock" along with "Popcorn and Candy Bars" on Art #174 in 1959, although they were intended to be demo tapes. "My Bimini Baby" stayed in the vaults and the whereabouts of the tapes are unknown, unfortunately.

Also in 1959, Ruth Hardt managed that her songs were recorded on a second occassion, this time for the local Panama label, owned by Herb Wolff. The record featured "Popcorn and Candy Bars" b/w "My Bimini Baby" and on both sides, Bey Ireland took over the vocals, another local singer who performed rock'n'roll at that time. Ireland also had a great release on Art in his own right, "Snack, Crackle and Rock" / "Baby Sitter's Rock" (Art #177, ca. 1958). Also, these songs were written by Ruth Hardt. He later went to Nashville, where he cut several country singles on local labels including RIC, Newport, and JED. He toured the south at least until the early to mid 1970s.

Herb Wolff, Jr., was a National Airlines pilot until 1959, when he set up Panama Records. He regularly flew the New York-Miami line. The adress of the label was Box 146 at Airport Station in Miami, which makes it probable that Wolff still held his job as a pilot when founding Panama. The first record that appeared was by Buddie Satan (Panama #106) in June 1959. He found a business partner in the Compo Company based in Canada, which not only pressed his records but also handled the distribution. Cash Box announced the release of two LPs on the label by Buddy [!] Satin ("Satin Take's a Holiday") and Alan Dean ("Music to Bawl by") on June 20, 1959. The magazin gave the headquarter of the firm as Coral Gables, Florida. Alan Dean, "one of Panama's stars" as decribed by Cash Box in November 1959, went on a promotion tour in Australia after the release of his single "Don't Do It" b/w "The Come Back" (Panama #111).


The last disc of Panama was released early in 1960. Then, Wolff discontinued the label and instead founded another firm called Artistas Panamenos, which was indeed located in Panama. Billboard reported on November 14, 1960, that Wolff was searching for pressing plants at that time to manufacture his discs. Thereafter, Wolff vanished from the radar. There was a Herb Wolff, Jr., who appeared on October 18, 1971, in the Kingston Daily Freeman as the secretary-treasurer of the Cornell Hose Company, a volunteer fire company in Kingston, New York. If this is the same man, is not known.

Email ThisBlogThis!Share to TwitterShare to FacebookShare to Pinterest
Labels: from Mellow's vaults, Miami