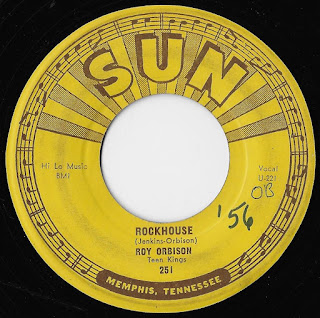 At the Rockhouse
The story of one of rockabilly music's anthems

The song "Rockhouse" (often also spelled "Rock House"), now a rockabilly anthem, was recorded in its best known version by Roy Orbison but was eventually often covered, especially by modern rockabilly combos. The origins of this song, however, date back to early to mid-1956 or even earlier.

How the house began to rock
Mississippi born Harold Jenkins just got out from the US Army, where he had served in Yokohama. Upon his return, Jenkins soon heard Elvis Presley's recording of "Mystery Train" and, although he was a lover of country music, decided upon a career as a rock'n'roller. He put together a group, which he named "The Rockhousers" and started writing songs. One of them was the band's signature song, "Rockhouse." It was about a dancehall, where all the cool cats went on Saturday nights.If Jenkins had a certain inspiration in mind is not known but you could find lots of those venues across the south back then.

Jenkins auditioned a couple of times at Sun Records but label owner Sam Phillips had little interest in Jenkins. However, a couple of demo sessions were made and in the summer of 1956, one of those sessions produced the demo of "Rockhouse," among some other recordings. The line-up consisted of Jenkins on vocals and rhythm guitar, Jimmy Ray Paulman on lead guitar, Bill Harris on bass (other sources also name Jimmy Evans, which is doubtful however), and Billy Weir on drums. Phillips was impressed enough with the song and purchased it for his publishing company Hi-Lo.

Roy Orbison at the Rockhouse
Seeking for song material for Roy Orbison, who just had a noteworthy hit with "Ooby Dooby," Phillips relied on "Rockhouse." Orbison took the song and re-worked it. It was hardly the same song anymore and Orbison sorted out much of the lyrics. On September 17, 1956, Orbison and his band, the Teen Kings, recorded the song along with another tune, "You're My Baby" (a Johnny Cash composition). The lineup included Orbison on vocals and electric lead guitar, Johnny "Peanuts" Wilson on rhythm gitar, James Morrow on electric mandolin (although inaudible), Jack Kenelly on bass, and Billy Ellis on drums. Producer Jack Clement (his first production at Sun) put a good load of echo behind the recording of "Rockhouse" but Phillips was satisfied with the result and released both songs on September 24, 1956, on Sun #251.

Billboard reviewed the disc on October 20 in its "Country & Western" segment as a spotlight and was excited: "[...] Flip [Rockhouse], is another good rockabilly rhythm side, is wraped up solidly by Orbison, who could break thru with a hit follow-up to his 'Oobie Doobie.'" However, the moment of success had passed and the chance to cash in on "Ooby Dooby" had been gone already. The disc did not even found mention in Billboard's territorial charts until the end of the year. Orbison would record more material for Sun but success eluded him until the 1960s, when he became a superstar with such well produced ballads like "Only the Lonely," "Blue Bayou" or "Pretty Woman." When Orbison hit big in 1961 on Monument Records, Phillips hauled out his Orbison tapes and released an album of it to cash in. It was titled "At the Rockhouse" and of course included "Rockhouse."


Contemporaries at the Rockhouse
Although "Rockhouse" became not a chart hit for Orbison, it got nevertheless enough exposure to spawn some cover versions (this, in part, due to the comprehensive tour activies by Orbison and other Sun artists across the south). The first to record a version of his own was Texas born Buddy Knox. Infact, Knox and Orbison knew each other from mutual appearances on radio and at the advice of Orbison, Knox auditioned at Norman Petty's studio. This resulted in Knox' first hit "Party Doll" in early 1957. On March 20, 1957, Knox and his band, the Rhythm Orchids, held a session for Roulette at the Bell Sound Studio in New York City, where they recorded their version of "Rockhouse" along with some other rock'n'roll covers. The line-up consisted of Knox on vocals, Donny Lanier and George Barnes on guitars, an unknown bass player, and Dave Alldred on drums. The recording was released on Knox's first, self-titled album on Roulette in 1957. Knox would eventually cut another version in 1979 in London, which was released on Rundell and Rockhouse LPs.

Another version was recorded in 1960 by Ralph Jerome, which was issued around October that year on KP #1007. Chan Romero, who recorded the original hit version of "Hippy Hippy Shake" (later to be recorded by the Beatles and the Swingin' Blue Jeans), cut a demo version of "Rockhouse," which was, however, rather a reworking than a cover as Romero changed the lyrics and structure of the song. On that take, he accompanies his singing with his electric guitar. The tape remained unreleased at the time but finally found its way onto the 1995 CD "Hippy Hippy Shake" on Del-Fi Records.

Fellow Texan Bobby Fuller recorded another version around 1963/1964, before he made his move to Los Angeles and hit bit with "I Fought the Law." Fuller, who had furnished a complete recording studio in his home in El Paso, recorded many demo sessions there with his band, including a rollicking and dynamic version of "Rockhouse." Fuller used a slightly different arrangement for the song and it can be assumed that he and his group also performed the song live on stage. However, it stayed in the vaults until 1984, when it was released as part of the "Bobby Fuller Four Tapes" on Voxx/Rhino. Tragically, the aspiring Fuller had been found dead in 1966 in his car, parked in front of his apartment. The circumstances surrounding his death are unsettled to this day.

Modern day rockabilly versions
Since, "Rockhouse" has become a classic in rockabilly music and has been covered many times by countless modern rockabilly artists, either live or on record. The following is a selection of modern day cover versions:

could you upload it?