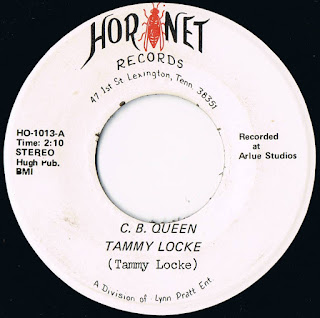 While there is nothing known on Tammy Locke except for the fact that she recorded one single for Lynn Pratt's Hornet label in the 1970s, Lynn Pratt's career has been spotlighted a bit more. Thus we concentrate not on Locke but on Pratt and Hornet Records in this post. By the way, does someone know where Arlue Studios was located?

By the time Lynn Pratt made his first commercial recordings in 1956, he was already 30 years of age. Nevertheless, Pratt waxed some of the hottest rockabilly music that ever came out of Tennessee. He was not one of the young singers imitating Elvis Presley. Pratt had a style of his own, developed by dint of his country music background and the unique but highly interesting musical circumstances.

Leonard Hugh “Lynn” Pratt’s birthday and birthplace are disputed. Country and rock’n’roll researcher Adam Komorowski mentions Pratt was born 1927 in Lexington, Tennessee. However, Pratt was actually born on April 9, 1926 in Sugar Tree, Decatur County. A rural area in West Tennessee, it is located on the Sugar Tree Fork about 32 miles northeast of Lexington. He was the son of Walter Erie “Dutch” (1889-1962) and Amy Pearl (Baker) Pratt (1891-1967) and had four brothers (Walter Perry, Willie Earl, Clifford Clay, Carl David) and four sisters (Bonnie Lee, Berna, Doris, Verna Mae). Pratt’s family hailed from Decatur County but lived in Henderson County by 1913. By the time Pratt was born, they were again residing in Decatur County but moved back eventually, where most of the family members would spend much of their lives.

In 1939, Pratt attended a Saturday evening Grand Ole Opry show at the Ryman Auditorium in Nashville, which impressed him very much. He had the chance to talk to some of the musicians after the show’s end and left Nashville with the determination to become a musician in his own right. While still in high school, he founded his first band. During World War II, Pratt joined the US Navy and served in the South Pacific. There, he played and performed as much as he could. After the war, Pratt began to travel through Arkansas and Missouri in order to promote products of the Continental Drug Company as a singer over radio and at personal performances. He returned to Tennessee in 1948 and made nearby Jackson, Tennessee, his home base. Pratt was earning his living as a barber at some point in his life but it is unclear if he kept it as his day job or if he was able to make his living out of music, at least for some time.

It is assured that Pratt auditioned for Sun Records in Memphis, Tennessee, to no avail. Tapes were found in the Sun vaults under his name, including “If I Can’t Have You.” A friend of Pratt’s, Danny Hudson, recalls that Pratt began recording for Sun around 1954: “Lynn started recording at Sun Records in the 1950s before Cash, Perkins, Lewis, Presley, etc. had hits. Sam Phillips decided not to publish Lynn's songs, so Pratt left Sun […].” “If I Can’t Have You,” however, sounds it was recorded about 1956 or later. The recording featured a rhythm and electric lead guitar as well as drums plus Pratt’s vocals.

By 1956, Elvis Presley had his first #1 hit with “Heartbreak Hotel” on RCA-Victor. Lynn Pratt was impressed with the new style of music and although Sun had refused him, he did not give up and set up his own record label he called Hornet Records in Lexington. Hornet was a tiny label operated by Pratt from his home on Summer Street. At that time, his regular band consisted of Pratt on vocals and rhythm guitar, James „Ikey“ Hauner on lead guitar, Charles F. “Charlie” Roach on steel guitar, Bill Grantham on piano, A.J. Maness on bass and Henry Hays on drums. Charlie Roach had previously performed with Red Rolison, Charles Moore, and Jimmie Rhodes in a band. He founded Westwood Records in Jackson, Tennessee, in the summer of 1959 and recorded a lot of artists from that point on. Regarding the other band members, nothing can be told of them.

Pratt organized a recording session at radio WSIX in Nashville with his band in 1956 (possibly without drummer Henry Hays) and laid down “Tom Cat Boogie” b/w “At Night Time.” The top side is a fine rockabilly song with enjoyable lead guitar and piano breaks. The songs were released that year on Hornet #1000 and proofed to be a strong seller for Pratt, at least regionally. It peaked at number one in several local charts and the success of his first single led to performances with Lefty Frizzell, Carl Perkins, Johnny Cash, and Jerry Lee Lewis.

During the next three years, Pratt cut three more singles for Hornet. The next to come after “Tom Cat Boogie” was “Troubles” / “I Don't Need” (Hornet #1001), two songs that pointed more towards country music. On his recordings of “They’re Learning” and “Come Here Mama,” released on Hornet #1002, Pratt and his band however laid down two very hot cuts. “Come Here Mama” is a variation of the old folk standard “Mama Don’t Allow (No Low Down Hangin’ Round),” which had been recorded by countless artists, including Riley Puckett (Columbia #15261-D, 1928), the Allen Brothers (Bluebird #BB-5448, 1934), a rockabilly version by Vern Pullens entitled “Mama Don’t Allow No Boppin’” (unreleased, 1956), and Billy Wallace (Sims #120, with Jimmy King, 1961).
His last single on Hornet consisted of a cover of Sonny Burgess’ classic rocker “Red Headed Woman” and “I Cried All Night” (Hornet #1003). Burgess had recorded “Red Headed Woman” in 1956 for Sun Records in Memphis (Sun #247) and already at that time, it became a favorite among rock’n’roll performers in Tennessee, Arkansas, and Missouri. Bobby Crafford, the Jokers, the Rebel Rousers, and Wayne Worley all recorded this song. On Pratt’s release, he was backed by the Jubilaires Quartet, a vocal group that has remained in obscurity since.

Apart from “Red Headed Woman,” all releases were penned by Pratt, who was an accomplished songwriter and owned Hugh Publishing in Lexington. But at the time of the release, publishing credits were split between Vol. Music Publ., Old Judge Publishing, and Bluff City Publishing. Interestingly, Old Judge also published songs on Chesley Sherod’s House of Sound label in Memphis, including “Real Cool” / “Want to Be Wanted Blues” (House of Sound #C&S 504, 1957) by Aubrey Cagle and “She’s Jail Bait” / “Sputnik” (House of Sound #C&S 505, 1957). Likely owned by Charles Matthews, Old Judge also published a lot of material released on Matthews' OJ label in Memphis.

In 1959, Pratt also recorded a singer named Carne Pitrello on Hornet. Pitrello was from New York and, contrary to widely held beliefs, was not a pseudonym for Lynn Pratt. He recorded a version of “When the Saints Go Marching In,” renamed simply as “The Saints,” and “You Belong to Me” (Hornet #1004) in 1959. “The Saints” was a wild version with guitar and piano breaks as well as an effective drummer’s performance. Interestingly, Pratt claimed songwriting credits for “The Saints” (Bluff City Publ.).

Unfortunately, all subsequent releases after “Tom Cat Boogie” failed to stimulate the same success. By 1965, Pratt and his band had given up playing music and recording. Nevertheless, Hornet was never closed down by Pratt and continued to exist well into the 1970s. Some of his friends still recorded for the label and but only few copies of each release were pressed. Pratt turned to producing and promoting in the 1960s and produced a show called “Tennessee Jamboree,” which may have been the same show that was broadcasted out of LaFollette, Tennessee, over WLAF. His friend Danny Hudson also stated Pratt was one of the persons who discovered Loretta Lynn (which is doubtful, however).


In later years, Pratt was also involved in several social and municipal affairs, including the local school board, the Lexington Fair Association, and the Henderson County Cancer Society. He was also at one time the owner of the Henderson County Times newspaper. By the 1970s, Pratt’s 1950s songs were rediscovered by music collectors in Europe. In 1975, the Dutch Collector label released a LP entitled “Super Rock ‘a’ Billy,” which included several tracks by Pratt. Also, it was probably Collector’s owner Cees Klopp who first interviewed Pratt during one of his visits to the US. Since, Pratt’s recordings have been re-released on numerous compilations in both the United States and Europe.

Lynn Pratt died on January 19, 2002, in Lexington at the age of 75. He is buried at the Henderson County Memorial Gardens in Lexington.

My mom was Linda Charlene green how can I find her 45 record she made in 1982?

I believe Arlue Studios was in Jackson, Tennessee, but I'm not sure. I do know "Arlue Inc" is credited on Spectrum Records releases.